Over 30,000 tourists flock to Ko Phangan for Full Moon Party

The party started at 1am on Sunday when tourists converged at Hat Rin beach, some staying at hotels and guest houses on Ko Phangan and others arriving on speedboats from nearby Ko Samui island.

The tourists of various nationalities from across the world quickly filled up the two-kilometre stretch of beach bathed in beautiful lighting under the clear, blue sky with the full moon the star of the show. The festivities continued until 7am on Sunday when the party was concluded without any unseemly incidents reported. 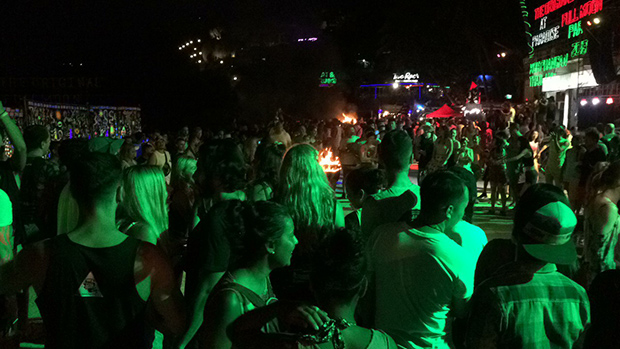 The last full-moon party of the year on Koh Phangan. (Photo by Supapong Chaolan)

Before the party began, at 9pm on Saturday, deputy Surat Thani governor Suthipong Klai-udom and Ko Phangan district chief Krirkkrai Songthanee chaired a ceremony to deploy military and police personnel. along with administrative officials, to launch security patrols to ensure the last Full Moon Party of 2018 was free of unwanted incidents.

Security cameras were installed at many spots along the beach, at lodging facilities and at shops selling alcoholic drinks.