After death in ring, fight continues over limiting child boxing

Supattra Inthirat, 12, known as Pancake, with her father before her fight at a small local fighting stage in That Phanom, Thailand, Nov 22, 2018. (NYT photo)

THAT PHANOM: Sprawled on a bamboo mat, Supattra Inthirat closed her eyes as her father massaged her hard arms with oil and menthol. In preparation for her 15th muay Thai bout, her father whispered a prayer into her ear.

When Supattra, a 12-year-old fighter known as Pancake, faced her rival and 400 fans under halogen lights, she would be fighting for a purpose: 2000 baht, almost a half of a month’s salary for families in this region.

“She will be a champion,” he said. “She must train early to build up her boxing bones.” 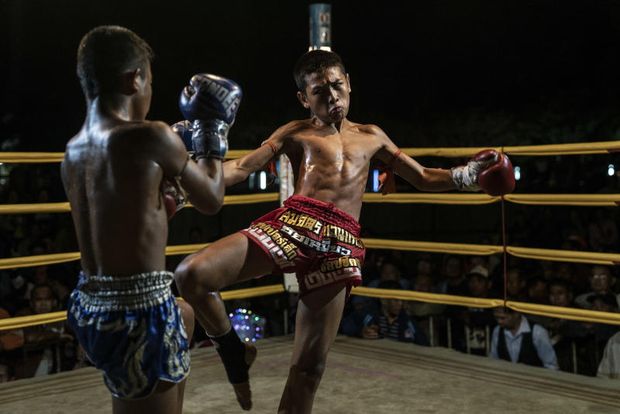 Across Thailand, muay Thai is a hallowed style of kickboxing propelled by both rich and poor. For the poor, it can be a form of social mobility, a means for muscled young boxers to fight their families’ way into the burgeoning middle class. For the rich, it’s a brutal gambling form in which tens of thousands of dollars can be won and lost each night.

Last month those worlds collided just south of Bangkok when Anucha Tasako, 13, died of a brain hemorrhage after being knocked out in a muay Thai fight. Video of the knockout showed five fierce blows to the head, then Anucha limply buckling to the ground as the referee tried to stop the action. Two days later, Anucha died in a hospital. He had fought an astonishing 174 bouts since the age of 8.

Now the country has been left to reconsider the brutality of a sport involving underage fighters and the shadowy gambling economy built around it.

“It’s child labour and child abuse,” said Dr Jiraporn Laothamatas, a neuroradiologist leading the charge to ban boxing by children. Last month she released a seven-year study on the effect of muay Thai on children’s brains, showing a steady drop in IQ and brain function for those who fight. “These kids earn. They feed their families and their promoters with their winning. We are destroying our children for sport.”

Anucha’s death stirred a wave of shock and anger across the nation, leading Thai lawmakers to propose a measure that could put stringent limits on fights and bar children younger than 12 from competitive boxing.

“This will destroy muay Thai,” said Dr Sudhichai Chokekijchai, a doctor for professional boxers in Bangkok and a fight enthusiast. “We should be focused on prevention instead of pushing kids away. They are fighting for their lives.”

The national rules state that boxers over 15 are required to register to fight officially. For competitors under that age, the rules are vague, requiring only parental permission and offering little guidance on gambling and safety.

Most fights happen off the books, though. A Thai investigative journalism centre reported that only 10,373 child fighters had registered between 2010 to 2017, while according to boxing officials nearly 200,000 children under 15 regularly compete.

“It’s in our blood to fight,” Dr Sudhichai said. “These laws will only push people away from doing it safely. These kids are healthy, they stay away from drugs and crimes. How will the government support them if they take fighting away?” 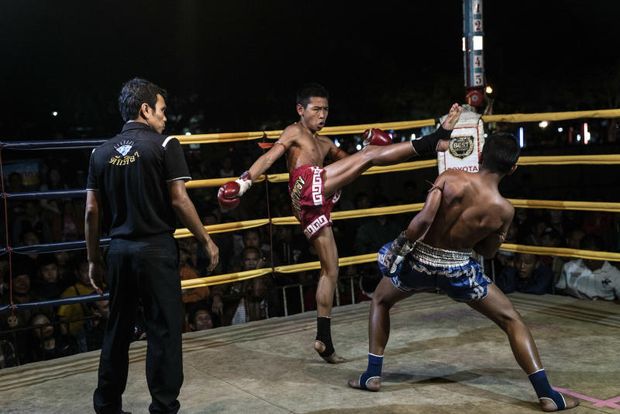 Muay Thai is known as the art of eight limbs, mixing kicking, punching, kneeing and elbowing to defeat an opponent. Fights are typically five rounds of three minutes of fighting with no headgear and competitors wearing 10 ounce gloves. Over the past 400 years, it has grown from a local sport form into a worldwide phenomenon popularised by films, video games and fitness enthusiasts.

In Thailand, muay Thai competitions have managed to stay outside the child protection and labour laws, which designate that only salaried children are considered workers. Money won in muay Thai fights is considered an award and is legal.

In the poorer and more rural regions of Thailand, where child boxing has its strongest following, that money can become an important buoy. Compared with families that may earn an average of 6500 baht a month working farms and rice paddies, a budding child fighter can bring in 2,000 to 20,000 baht for a victory — or even more for a knockout.

“Do you want them to play golf?” said Sukit Parekrithawet, a lawyer who defends fighter rights. “Every famous professional boxer starts at 7 years old.” 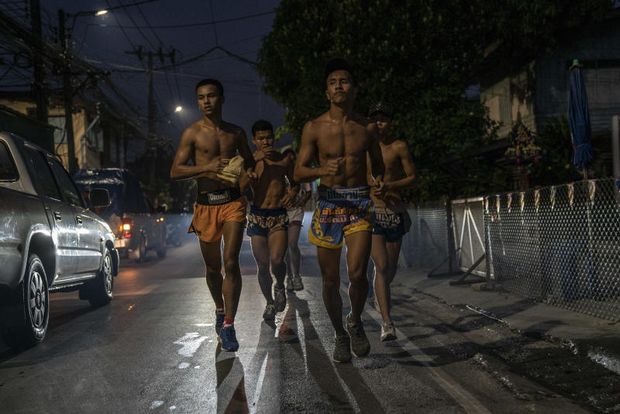 For fighters, a life of discipline and dedication begins early. In small, makeshift training camps in rural parts of Thailand, children punch with rotting gloves and donated bags, working their way up the ranks as they grow.

The best of them are recruited by Bangkok fight gyms. These act as makeshift boarding schools, where the elite young fighters live piled together on tiny mattresses away from their families and follow a rigorous training routine. At 4.30am, a 6-mile run in the dark. Boxing from 5.30 to 7. School until the afternoon, then another training session until the sun goes down.

The dream is to go pro. At the famous Rajadamnern Stadium in Bangkok, muay Thai bouts are held four times a week. Middle-age Thai men and foreign tourists pack into dim wings of the stadium, drinking beer and shoving their hands into the air in an elaborate array of motions signalling their bets. Whether it’s per round or per fight, wagers can easily jump from 1,500 to 15,000 baht in an instant. 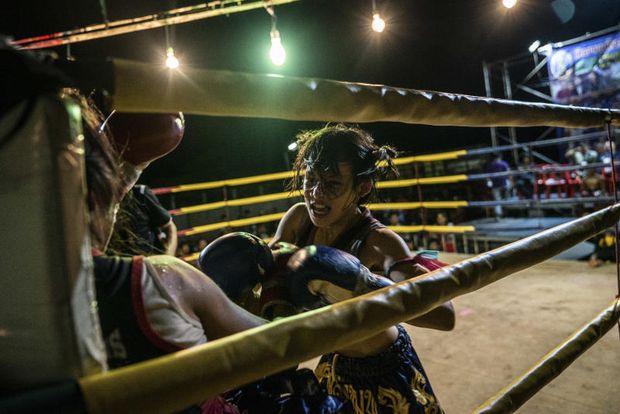 Supattra Inthirat, 12, known as Pancake, during a fight at a small local fighting stage in That Phanom, Thailand, Nov 22, 2018. (NYT photo)

Pancake’s career has had a promising start. Girls are relatively new to muay Thai, but comprise a growing sector, and Pancake has won 12 of her last 14 competitions. Coming from a middle-class family, she is one of the luckier boxers, able to train with her father, a former fighter himself, in their makeshift home gym.

On the night of her fight, she climbed into the ring to face another 12-year-old girl. Before the bell, the two wore stony faces and performed a swirling, traditional warm-up dance. Over a loudspeaker, an announcer called out the nicknames of others on the lineup: Super Small, Mint, Diamond Lighting, Diamond Cactus and Sidewalk Flower.

After five rounds of flailing arms and legs, the two girls walked off, faces sweaty and battered. The judges’ unanimous decision: Pancake had lost. Her father gathered her things.