Escaped prisoner Jirayu Leekpai, 26, is found inside an underground drain about 30 metres from the wall of Chaiya prison in Surat Thani after he and two others tried to escape early Tuesday. One of the prisoners was electrocuted. (Photo by Supapong Chaolan)

SURAT THANI: A prisoner was electrocuted while climbing a prison wall during an escape bid from Chaiya prison in the early hours of Tuesday. Another broke an arm and was apprehended, while the third managed to escape, but was later found hidden in an underground drain.

The incident occurred at Chaiya prison in tambon Talad Chaiy at around 12.30am on Tuesday, said Pol Col Wanchai Palawan, acting chief of Chaiya district police chief, who led officers to the prison after being alerted to the escape.

The body of a male inmate -- identified later as Wiwat Aksornsom, 32 -- was found lying on the prison wall after being electrocuted by an electric wire. Another inmate -- Chatchai Nakchatri, 43 -- suffered a broken arm after falling from the wall and was recaptured at the scene.

A third drug inmate -- Jirayu Leekpai, 26 -- managed to escape, but was believed to have been injured after jumping from the high wall.

The dead man, Wiwat, had been arrested by Tha Chana police for possession of 38 speed pills, and his case was being considered by the Chaiya court.

Chatchai had been arrested on two counts of possessing crystal methamphetamine. He was sentenced to two years and three months in prison on the first count.

The escaped prisoner, Jirayu, had been apprehended with 1,752 speed pills, and Tha Chana police were investigating the case before he fled.

Pol Maj Gen Apichart Boonsriroj, chief of Surat Thani police, on Tuesday morning sent another 120 police -- together with sniffer dogs -- to join prison officials and local police in hunting down the escapee.

Officers searched areas around the prison and sprayed mosquito repellent into underground drains. When officers later opened the covers, they found Jirayu was hiding inside a drain about 30 metres from the wall. He looked exhausted, they said.

A police investigation found that the three prisoners, who shared a cell, had managed to force open the lock on the cell door before climbing the wall.

Akhom Phusee, chief of Chaiya prison, said he had reported the jailbreak and the recapture of the escaped prisoner to the Corrections Department chief.

The prison had installed electrified wire on the wall and all prisoners were aware of this, he said. Prison authorities were investigating. 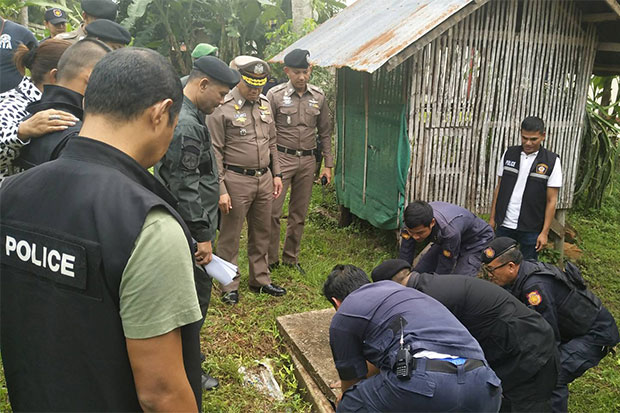 Police and prison officers open the cover of an underground drain behind Chaiya prison before finding the escaped prisoner inside. (Photo by Supapong Chaolan) 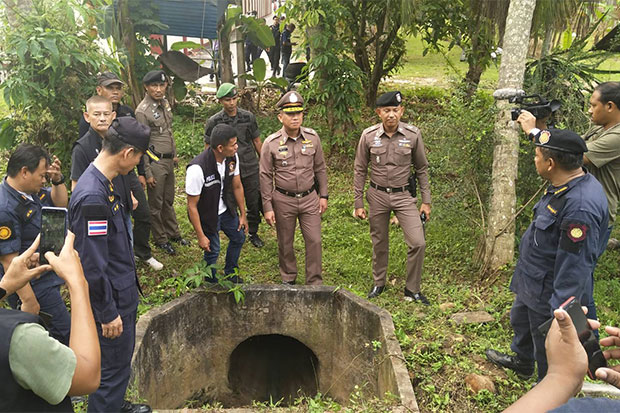