Weed on road to legalisation

A bill to legalise the strictly controlled production, import and use of marijuana and kratom for medical and research purposes was passed yesterday, amid concerns that patents on marijuana extracts will be secured mainly by large, foreign pharmaceutical companies. 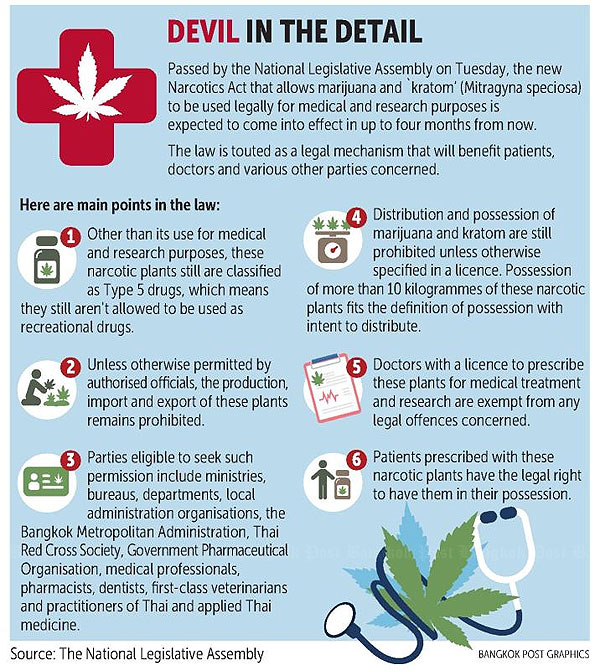 At the end of the National Legislative Assembly's (NLA) deliberation of the bill, it voted 166 to zero in favour with 13 abstentions.

Somchai Sawaengkan, an NLA member who served as chairman of the NLA committee vetting the bill amending the 2017 Narcotics Act, described the new law as a New Year's gift from the NLA and the cabinet to members of the public.

Marijuana will next be used legally for medical purposes once other draft laws required to strictly regulate marijuana use are passed, he said, adding that the NLA will accelerate its deliberation of these draft laws.

Prior to the voting on the new drug law, the NLA carried out the second and third readings of the bill, which consists of 28 sections.

The key part of the new drug law is to remove marijuana and kratom from the Type 5 narcotics classification under the Narcotics Act, so that they can be used for medical and research purposes.

Every activity involving the use of these two narcotic plants will be controlled under strict regulations. Such activities will also require prior approval by the committee on narcotics control.

In addition, any possession of more than 10 kilogrammes of these two plants, including permitted possession, will be considered possession with intent to distribute.

Parties eligible to seek permission to produce, import, export, take possession of or distribute these two plants include state agencies conducting medical research or offering studies on medicine, pharmaceutical science, science and agricultural science, according to the law.

Other government organisations with the same eligibility include those responsible for drug suppression and the Thai Red Cross Society.

Medical professionals, pharmacists, dentists and practitioners of traditional Thai medicine will also be eligible to apply for the permission to handle marijuana and kratom.

Educational institutions offering medicinal studies and research, farmers in registered community enterprises, operators of inter-country transport services, patients needing prescribed marijuana or kratom while travelling abroad and other parties as approved by the public health minister are also eligible to seek permission to handle the two plants. The new law also authorises the Narcotics Control Board to consider and approve requests for growing marijuana and kratom for these legalised purposes.

As for the legal punishment for possession with intent to distribute under the new law, the maximum punishment will be five years in prison and a maximum fine of 100,000 baht if the possessed amount is less than 10kg. If the amount exceeds 10kg, the prison term will be between one and 15 years and the fine between 100,000 and 1.5 million baht.

Three years after it comes into effect, the new law will require the committee on narcotics control to begin assessing the results of issuing licences for production, import, export, distribution and possession of marijuana and kratom every six months.

The NLA's passage of the new law, however, has been met with escalating concern that applications for marijuana extract patents previously submitted by foreign drug companies could then be approved. Critics of the patents worry that they could set back plans to develop marijuana for medicinal purposes.

Justice Minister ACM Prajin Juntong, meanwhile, said the cabinet yesterday discussed the patent matter at its weekly meeting and resolved to order the Commerce Ministry to suspend the Department of Intellectual Property (DIP)'s consideration of the submitted requests to patent marijuana extracts. "If this is done in haste, foreign companies will possibly become the ones dominating the business of supplying [marijuana extracts] to Thai medical institutions or even selling them to patients needing them," he said.

Withoon Lianchamroon, director of Biodiversity Sustainable Agriculture Food Sovereignty Action Thailand (Biothai), said that as of yesterday, Biothai had found that none of the 10 such patent applications had been formally rejected as claimed by Commerce Minister Sontirat Sontijirawong previously.

Despite a claim by the minister last month that at least three marijuana extract patent requests were formally rejected, Biothai had learned after checking the DIP website that the requests have not yet been dismissed, said Mr Withoon.

DIP officials also told Biothai that previous reports about termination of the patent applications were incorrect and the reality is that DIP has only agreed to consider terminating the patent requests, he said.

The status of the patent applications published on the DIP website may not be up to date, he said, citing DIP officials' answers to Biothai's inquiry yesterday. As such, Biothai found it to be impossible for the public to monitor the patent application process, which meant there wasn't any guarantee that they would be rejected as promised, he said.