Traffic is bumper to bumper in Muang district of Kalasin as revellers head back to Bangkok after the new year holiday. (Photo by Yongyuth Phupuangphet)

The first five of the "seven dangerous days" of New Year travel has seen 2,761 road accidents, 314 deaths and 2,848 people injured -- with Chiang Mai posting the highest number of accidents, while Nakhon Ratchasima has suffered the most deaths.

Prapon Tangsrikiattikul, the deputy permanent secretary for public health, said on Tuesday that on Monday, the fifth day of the seven-day New Year travel period, there were 569 road accidents which killed 72 people and injured 591 others.

The figures showed that Thailand's roads were slightly less lethal than over the same five-day period last year. 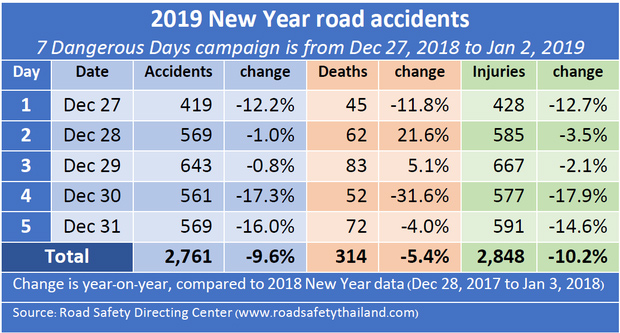 Authorities and volunteers are stepping up measures and deploying more medics as travellers return to Bangkok from home visits or vacation.