Activists in Chiang Rai have been making the opinion known for months, forcing the government to delay the blasting of the small islands and reefs. (File photo)

CHIANG RAI: Public hearings on a project to blast islets to allow large ships to navigate along the Mekong River will be held in this northernmost border province from Thursday through Saturday amid concerns by locals about its impact on the river's ecology and their livelihoods.

The hearings will be conducted in Wiang Kaen, Chiang Khong and Chiang Saen districts.

They will be organised by TEAM Consulting Engineering and Management Plc, which represents the Chinese project owner, CCCC Second Harbour Consultants, to collect information as part of an environmental impact assessment study.

The schedule of events was posted on the website of the Marine Office's Chiang Rai branch late last month.

The hearings were postponed from Dec 12.

Citing the hearings' documents, Jeerasak Inthayos, coordinator of the Rak Chiang Khong Conservation Group, said the project is aimed at clearing a passage along the river to allow 500-gross-tonne barges to pass.

Work will be carried out to ensure the river's watercourse is 2.5 metres deep, he said.

Mr Jeerasak said 13 spots along the river between Thailand and Laos will have navigation channels improved.

The work includes dredging, removing rocks by drilling and blasting them as well as building dykes to prevent some islets from collapsing.

Rock debris and sediment would be transferred by barges and dumped into deep watercourses of the river, close to the area where the navigation channels are improved, he said.

Mr Jeerasak said the spot where most dredging is likely to be carried out is Ban Saeo islet in Chiang Saen district.

The site is 2.6 kilometres long and 60 metres wide. 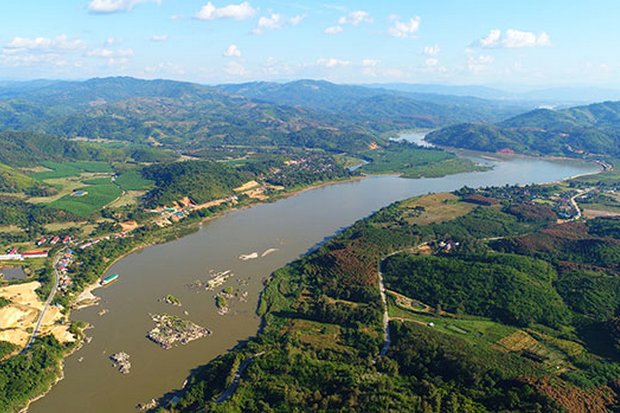 The Mekong is navigable - but not for the large cargo boats China wants to sail the river between Yunnan and Laos. (Photo supplied)

Meanwhile, local villagers who are aware of the hearings expressed concerns about the project.

Thonglai Bua-ngaidet, a 52-year-old villager from Ban Huay Luek in tambon Muang Yai of Wiang Kaen district, said the blasting could cause the collapse of the river banks and riverside land owned by the locals would be eroded since rapids help slow down currents.

"Fish resources could vanish [as a result of the project]," Mr Thonglai said.

"Villagers would reap no benefits from the boat navigation.

"Chinese merchants could be the ones who are at an advantage."

Phan Kanyadet, another villager in Ban Huay Luek, said blasting the rapids would cause grave damage to the locals' way of life.

"The explosions could damage habitats for fish and aquatic weed."

The project is part of the so-called "Development Plan of International Navigation on the Lancang-Mekong River: 2015-2025", approved in December 2016 by the cabinet.

The project covers the river from China's southwestern Yunnan province to Luang Prabang in northern Laos.

Thailand and Myanmar are also part of the section.

The project has drawn harsh criticism from civic networks, who said the blasting could threaten fish breeding grounds and threaten rare species such as giant catfish.

Critics say the survey may threaten Thailand's territorial claims to certain areas on the Laos border based on deepwater channels agreed under a French treaty.

Following opposition, Foreign Minister Don Pramudwinai said in December 2017 that the project could be put on hold.