Pabuk takes aim at Nakhon as frantic evacuations made

Authorities in Nakhon Si Thammarat made frantic evacuations as Tropical Storm Pabuk was expected to touch down on the province's coastline this evening, triggering fears of severe flooding and mudslides across 95 sites in the province

Nakhon Si Thammarat governor Chamroen Thipphayaphongthada ordered the evacuations early yesterday morning. More than 30,000 people living in six seaside districts of the province were moved out of their homes within a matter of few hours.

"We want 100% evacuation for residents in risk areas. It is a must for people to relocate in advance because we cannot afford to wait for bad incidents to happen," the governor told the media as he oversaw provincial officials and soldiers help thousands of villagers move out of their houses.

Nakhon Si Thammarat was marked as the province to bear the brunt of the tropical storm.

The province is planning to evacuate still more villagers. Besides moving people from coastal villages, rescue officials will also evacuate residents of villages located near mountains and other flooding vulnerable zones.

According to the Royal Irrigation Department, there are 95 areas in the province vulnerable to mudslides.

In total, authorities have prepared 190 shelters, mostly state agencies and schools, for up to 86,000 evacuees. 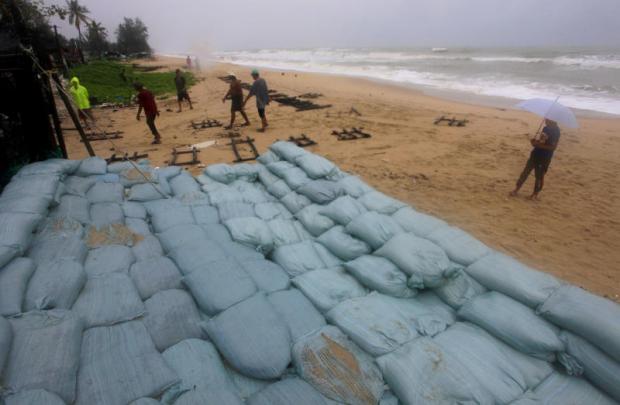 A man stands next to a sandbank built to protect properties in seaside communities in Songkhla, which is among southern provinces expected to bear the impact of tropical storm Pabuk. AP

The Thai Meteorological Department confirmed yesterday that tropical storm Pabuk would crash on its shoreline today.

In light of the news, the province was forced to make frantic evacuations and prepare for rescue operations because previously Pabuk was estimated to initially make landfall on the tourist islands such as Koh Samui and Koh Phangan in Surat Thani.

The department, however, changed its forecast immediately after the tropical storm was influenced by more low cell pressure offshore, nudging it a bit more southward towards Nakhon Si Thammarat instead.

The storm is expected to make landfall in one of four districts -- Sichon, Hua Sai, Tha Sala or Talum Puk cape in Pak Phanang. But the Japanese Meteorological Agency forecasts it will only go near Talum Puk cape but hit Tha Sala with wind speeds of 83 kilometres per hour.

The cape once suffered catastrophic damages by tropical storm Harriet in 1962.

The Southern Peninsula is no stranger to severe storms and evacuations. Many of the villagers were quick to move and leave their homes. 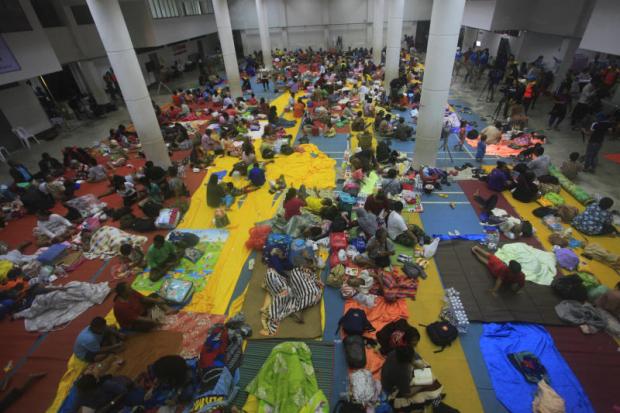 "It was my second large evacuation," said Nongyao Rotkaeo as her family packed their belongings and left their home in tambon Thung Sai in Sichon district to an evacuation shelter.

Almost 30 years ago, her family was also told to evacuate when typhoon Gay slammed Chumphon, situated in the upper South.

The province, along with neighbouring Surat Thani located to its north, is expected to be soaked by 200 millimetres to 300 millimetres of rainfall per day, deputy secretary-general of National Water Resources Office, Samroeng Saengphuwong estimated.

The heavy rain is causing worries about massive flooding especially because many of the major reservoirs are close to maximum holding capacity.

They were told to especially keep a close watch on some major dams with water levels near their capacities. They include Ratchaprapha dam (83% of capacity) in Surat Thani and Pranburi dam (90% of capacity) in Prachuap Khiri Khan.

Irrigation officials are releasing water from reservoirs and rivers in order to have enough room to receive rainwater. There are 15-medium sized reservoirs in Nakhon Si Thammarat, Surat Thani, Prachuap Khiri Khan and Phetchaburi.

Besides Nakhon Si Thammarat, the move to evacuate, or relocate, people is also being carried out in other southern provinces.

In Pattani, villagers in Nong Chick district were also told to evacuate to avoid Pabuk impact. Nong Chick is one of six districts facing the Gulf of Thailand.