Pabuk has lost speed and moved across land to the Andaman Sea, leaving behind a trail of homes damaged by fallen trees or blown-off roofs and disrupted power networks.

The first tropical storm to hit Thailand in 30 years turned into a depression at 7am on Saturday, with the centre in Thap Put, Phangnga province, the Meteorological Department said in an update issued at 9am on Saturday.

It moved westward at 10km per hour and entered the Andaman Sea at 9am. 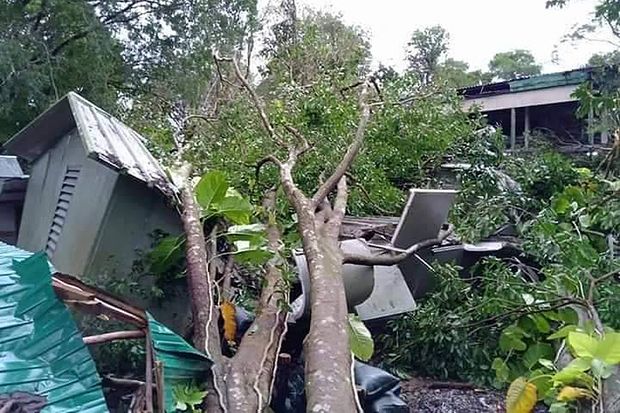 The weather pattern will continue for another day and people in the areas have been warned of flash floods and runoff.

Waves in The Gulf of Thailand and the Andaman Sea will continue to be strong, at 3-5m high. People on the eastern coast have been cautioned about dangers caused by strong winds and waves ashore. Fishermen are advised to stay ashore for another day, the announcement said.

Authorities reported in the afternoon three people died while one is missing after the storm.

Flights resumed on Saturday to the southern provinces, after closures of Nakhon Si Thammarat and Surat Thani airports.

Most ferry services to Thailand's southern holiday islands have resumed following a suspension for the storm.

The storm tacked away from the key tourist islands of Koh Samui, Koh Phangan and Koh Tao where large numbers of travellers hunkered down for 24 hours in heavy rains, unable to leave as airports closed and ferry services were cancelled.

"There were no casualties, there is some sunshine today and I'm confident some tourists will be able to leave today as ferries and flights resume," said Koh Samui district chief Kittipop Roddon.

But "red flag" swimming bans off what are normally sun-baked paradise beaches at this time of year were still in place.

"It's all over. All 10,000 tourists are safe... I am relieved," said Krikkrai Songthanee, district chief of neighbouring Koh Phangan, an island famed for its full-moon parties.

But holidaymakers keen to leave the islands face long delays with a backlog of flights as three airports reopened and ferry services slowly resumed on Saturday.

Over the past few days, more than 28,000 people have been evacuated into shelters across seven provinces, the Department of Disaster Prevention and Mitigation said in a daily tally on Saturday.

Authorities have recorded just one death, after a fishing boat capsized in strong winds near the coast of Pattani province, leaving another of the crew missing, though four more were safe.

PTT Exploration and Production Plc, a unit of state-owned PTT Plc, said it expected to resume operations of oil rigs at Bongkot and Erawan, two of the country’s biggest gas fields in the Gulf of Thailand, on Sunday.

It had suspended operations there since Monday and brought staff inland.

Workers fix a boat owned by Raja Ferry in Nakhon Si Thammarat on Saturday after the storm hit the previous night. (Photo by Pattarapong Chatpattarasill) 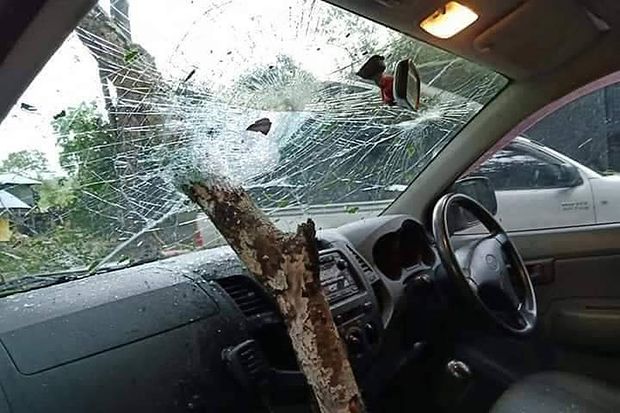 A view from Khanom Beach in Nakhon Si Thammarat on Saturday morning. (Photo by Pattarapong Chatpattarasill)