Rescuers help to extract stranded passengers from the double-decker bus that turned upside down in Khlong Luang district in Pathum Thani on Sunday morning. (Photo by Pongpat Wongyala)

PATHUM THANI: Six passengers - a man, four women and a baby girl - were killed and about 50 others injured when a double-decker tour bus heading from Roi-et's Phanom Phrai district to Bangkok overturned in Khlong Luang district early Sunday, police said.

A police investigation revealed that the bus of Prayad Tour Company departed Phanom Phrai district in Roi-et province at 7pm on Saturday. Passengers said the accident happened in the rain after the driver braked suddenly to avoid hitting a vehicle in front of it, causing it to overturn and come to rest in the road median ditch upside down.

A man, four women and a baby girl, about 3-5 months old, were killed. About 50 others were injured. They were rushed separately by rescuers to Thammasat Chalerm Phra Kiat, Bang Pakok Rangsit, Pathumvech, Pattara-Thonburi, Paolo Rangsit and other hospitals in the area.

Police were still looking for the driver, who might be among those admitted to hospital, for questioning. 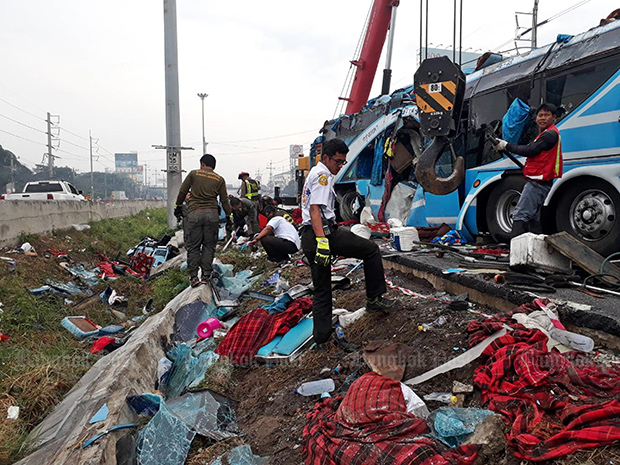 Authorities and rescuers gather evidence tossed out of the bus that overturned in Khlong Luang district in Pathum Thani. (Photo by Pongpat Wongyala)