The thick haze hanging over Bangkok and surrounding provinces is seen in this aerial view over the Chao Phraya River in the Kiakkai area on Sunday. (Photo by Pornprom Satrabhaya)

Air pollution caused by hazardous particulate dust matter is set to worsen again in the capital, the Pollution Control Department (PCD) has warned.

The ultrafine dust returned to Bangkok and its vicinity Sunday, with 21 areas reporting air pollution exceeding the "safety limits", according to the PCD's official release.

After clear blue skies during the New Year holiday period, the capital's skyline was once again shrouded in smog Sunday morning.

An influx of vehicles driven by those returning from out of town coupled with dry weather and poor air circulation were blamed for dust accumulating again.

The PCD's air monitoring station found 21 roads where levels of airborne particulate matter of up to 2.5 micrometres in diameter (PM 2.5) exceeded the acceptable Thai standard of 50 microgrammes per cubic metre (µg/m³).

Exposure to PM 2.5 has been found to cause short-term adverse health effects such as eye, nose, throat and chest irritation, as well as being linked to long-term health conditions such as asthma and cardiovascular disease.

Normal face masks do not work effectively as PM 2.5 particles are smaller than the width of a single human hair. 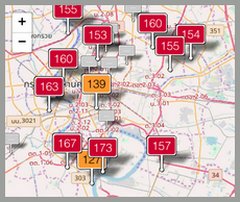 Wherever you went in Bangkok on Sunday, there was no relief from the pollution. (Map via aqicn.org)

According to the PCD, various areas, especially roads, were found to have levels of PM 2.5 between 48 and 81 µg/m³ around noon on Sunday.

The PCD warned that air pollution levels Monday will range between moderate and harmful in the city, and people should monitor relevant information from authorities but not panic.

Children, the elderly, pregnant women and those with chronic diseases were advised to be cautious and quickly visit a doctor if they develop symptoms.

Air quality can be monitored at air4thai.pcd.go.th or via the mobile application "air4thai".

The last haze prompted City Hall to spray water to clean roads as well as implement various other measures, including a ban on parking cars on main roads and impounding vehicles with exhaust fumes that exceed emissions guidelines.