Migrant workers sort out fishing nets on a boat in Phangnga in 2014. (Bangkok Post file photo)

BRUSSELS: The European Union has withdrawn its threat to ban Thai fisheries exports into the bloc after Bangkok pushed through reforms to contain illegal fishing.

Thailand had been faced with the threat of a ban for more than three years over its failure to combat illegal fishing, but consultations with the EU and legal and compliance reforms allowed the bloc to take back the so-called yellow card.

EU fisheries commissioner Karmenu Vella met with Thai deputy prime minister Chatchai Sarikulya Tuesday and said that as combating illegal fishing remains a priority for the EU, he was “excited that today we have a new committed partner in this fight”.

Thailand is the world's third largest exporter of seafood -- a status that rights groups say is achieved through illegal overfishing and reliance on low-paid trafficked workers from neighbouring countries.

The EU imposed the yellow card in April 2015, a warning the country at the time was not sufficiently tackling illegal, unreported and unregulated fishing.

The decision on Tuesday reversed the first step of a process that could have led to a complete import ban of marine fisheries products into the EU.

Since the yellow card was issued, the EU and Thailand have engaged in a constructive process of cooperation and dialogue, said Mr Vella.

The measures implemented include amending its fisheries legal framework in line with international law of the sea instruments; reinforcing compliance with its obligations as a flag, port, coastal and market state, including clear definitions in its legislation and set up a deterrent regime of sanctions; and reinforcing the mechanisms of control of the national fishing fleet and enhanced its monitoring, control and surveillance systems. This includes remote monitoring of fishing activities and a robust scheme of inspections at port.

The commission also recognises the Thai efforts to tackle human trafficking and to improve labour conditions in the fishing sector, it added.

"While not part of the bilateral dialogue on illegal, unreported and unregulated fishing, the commission and the European External Action Service have addressed with Thai authorities the serious human rights abuses and forced labor in the fishing industry. Thailand has recently announced the ratification of the International Labour Organisation's convention No.188 on Work in Fishing (C188), the first country in Asia to do so."

The EU, a market of 500 million consumers, is the world's biggest importer of fisheries products. 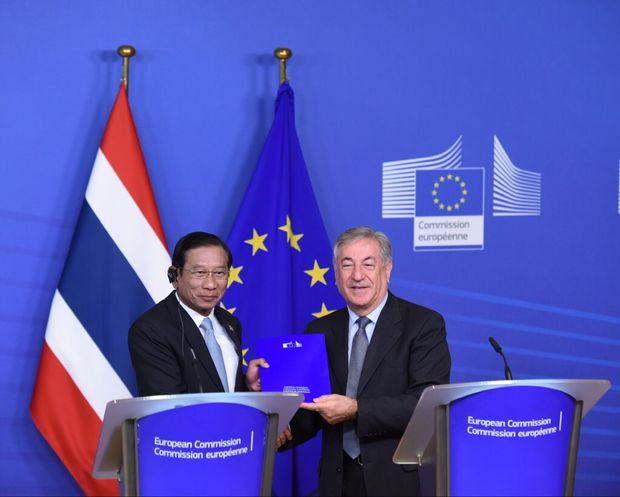