Areas under expressways in Bangkok often go overlooked. Despite some of this space being located in business areas, the property remains untouched. 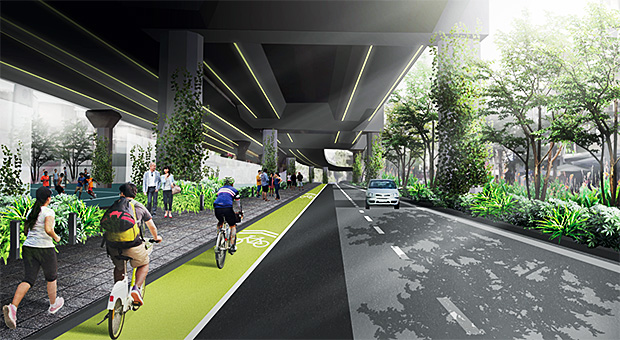 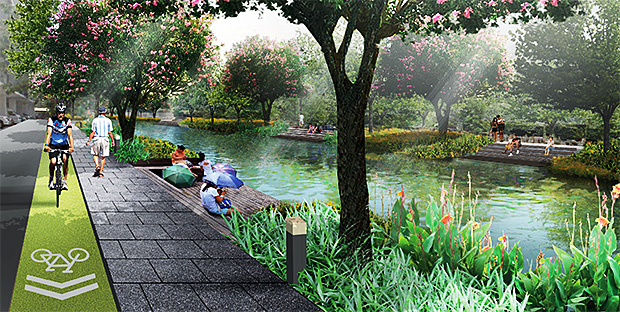 Scenic ride: The “10KM Project” envisages a 10km bicycle route from Chatuchak to Bang Rak as well as the development of green public spaces. (Photo Courtesy of Shma Co)

The land under the expressways belongs to the Expressway Authority of Thailand (Exat).

There are 1,577 rai under these major traffic routes. Roughly 40% of these areas, or land amounting to two times the size of Lumpini Park, is unused. Meanwhile, where the land is used, it is usually just for parking space, small warehouses or open markets with little value to local communities. 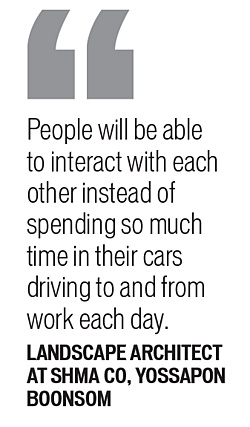 However, architects at Shma Co, a Bangkok-based landscape firm, believe the land could be developed into useful public space.

Shma, a respected architectural firm, which has worked on high-profile property developments and with public organisations in the city, recently completed a design project for the Neilson Hays Library, a vintage building and garden adjacent to the British Club in the Surawong area.

Last year, Shma submitted a blueprint for the "10KM Project" that would utilise land under the Sirat Expressway.

The design won a "smart city" award at the 2018 World Architecture Festival in Amsterdam.

"We are glad that project won the award. The design can change the environment in Bangkok for the better. It can transform the city's urban environment within a decade," said Yossit Poonprasit, an architect at Shma.

The project proposes creating infrastructure, such as a skywalk bridge, bicycle lanes, canal banks and pocket parks in the deserted land under the expressway in order to create new public spaces in the city.

"A huge benefit of the 10KM Project is that it will promote travelling by bicycle on a daily basis. Residents and visitors can pedal to work or tourist destinations. It will reduce the use of cars, help combat global warming and cut down on daily expenses. People will be able to interact with each other instead of spending so much time in their cars driving to and from work each day," Yossapon Boonsom, a landscape architect at Shma told the Bangkok Post.

The land use for the project has been divided into six zones, all linked by a 10km bicycle route. 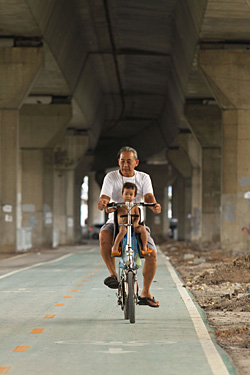 Ripe with pot ential: Most of the areas under expressways in Bangkok are underdeveloped. (Photo by Pornprom Satrabhaya)

The first is an "Urban Promenade" to encourage sustainable forms of travel and link people with mass transit hubs.

It starts in the Chatuchak area. The design creates connectivity with the skytrain and subway, public parks and shopping areas such as Chatuchak Market and the Central Lat Phrao department Store.

Second is an "Ecological Canal". The area along the Bang Sue Canal will be developed into a recreational area on the waterfront, walkway and pocket parks.

The third zone is a "Canal Park" that will transform abandoned under-highway areas into recreational areas for communities.

Fourth is a "Healthy Strip". This zone aims to boost activity in the new medical innovation hub in Ratjavithi area that is the location of several major hospitals and medical schools. Here, one of the goals is to increase connectivity between the institutions so that staff might even be able to ride bicycles from one hospital to another. The area will also be landscaped to create an environment that is conducive to wellness and recovery.

Zone five will be a "Sports Ground" arena and playground for all ages. This area is located in Uruphong, in the vicinity of Rongmuang and Samyan. The design envisages a space for community centres. Its highlight is a sports fields and children's playground.

Finally, the sixth area will be a "Creative Strip" and will develop space for residents and tourists to use on the riverside of the Chao Phraya River in Bang Rak. It will be a creative, cultural space designed to draw people to the area's vintage buildings and traditional communities. Shma hopes to increase the interaction between residents and tourists at these important cultural sites and creative spaces on the riverfront. 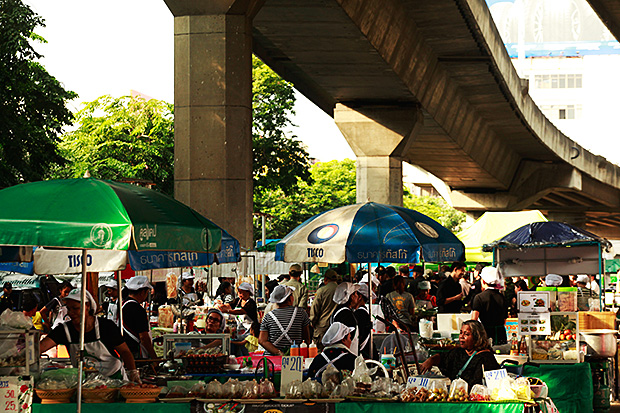 Opportunity knocks: There are 1,577 rai under expressways in Bangkok, only 60% of that used. (Photo by Pornprom Satrabhaya) 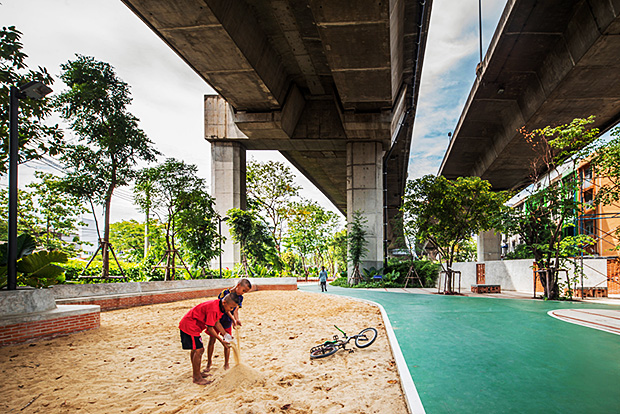 Child’s play: Another project designed by Shma is the playground under Sirat Expressway which was built in 2016. (photo by Arsom Silp Institute of the Arts)

The budget for the project is estimated at around 400-500 million baht for developing infrastructure along the 10km route and another 100 million for landscaping, electricity installation and the children's playground and sports fields.

It is not the first time that Shma has undertaken land development on behalf of Exat. Previously, the firm designed the playground and sports field under Sirat Expressway near Uruphong. That project, Kilapat 2 (Sports Development 2), was initiated by the Office of the Secretariat under the late King Bhumibol's royal initiative to create community space for sport development and was funded by the Thai Health Foundation.

AYUTTHAYA: A young French woman was killed when a car hit her bicycle at an intersection in Phra Nakhon Si Ayutthaya district on Wednesday night.