Rainmaking to begin this week to clear air

The government is stepping up efforts to fight the worsening, detrimental effects of air pollution caused by the fine dust that has blighted Bangkok and surrounding areas since late last year. 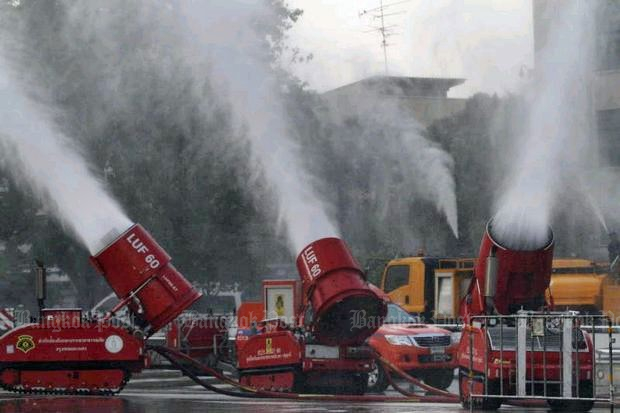 Bangkok firefighters on Monday 'soaked the sky' with high-pressure fire cannons in front of City Hall - a short-term measure to address the hazardous air pollution in the city. (Photo by Apichart Jinakul)

Authorities are set to deploy two aircraft with artificial rainmaking technology to attempt to create downpours in the east of Bangkok Tuesday evening, with the aim of clearing the air in one of the worst-hit quarters of the city.

According to the Pollution Control Department (PCD), various areas of Bangkok and its vicinity are suffering a huge volume of PM2.5 pollution particles that exceeds the Thai safety limit of 50 microgrammes per cubic metre (µg/m³).

PM2.5 levels in the city ranged between 70 and 100 µg/m³, according to readings taken by 10 air quality stations in Bangkok at 6pm Monday.

Surasee Kittimonton, chief of the Royal Rainmaking and Agricultural Aviation Department, said that, depending on weather conditions, rainmaking is likely to be conducted begin Tuesday and run until at least Friday.

Two rainmaking Casa aircraft will be deployed from Rayong airport, he said.

"The rainmaking will be conducted in Chachoengsao and it is expected that rain will fall in Bangkok in the evening," said Mr Surasee. "Rain will fall in the eastern areas, such as Bang Na, Sai Mai, Lat Krabang and Bang Kapi."

The target areas and flight plans will be ironed out once the planes are ready, the spokesman said. 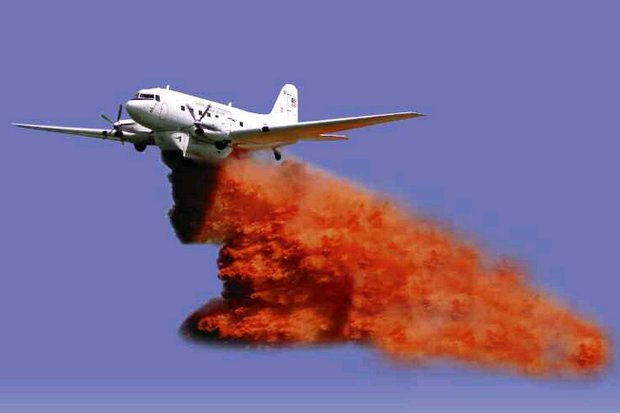 US-converted Basler BT-67 disaster-fighting aircraft are being moved to Don Muang airbase and will be modified on Tuesday to spray water over haze-heavy areas. (Photo via Basler Turbo Conversions)

Prime Minister Prayut Chan-o-cha was moved to speak on the issue during his trip in Chiang Mai after reports highlighted the risks to health that the fine particles can cause.

"Campaigns must be raised to promote the use of face masks and water must be sprayed in the areas where the volume of dust is beyond the safety limit," said Gen Prayut, adding that the causes of the problem must be addressed too.

The Public Health Ministry has been instructed to hand out N95 face masks to people in the worst-hit locations, Mr Buddhipongse said.

Standard face masks do not provide sufficient protection against such fine particles, according to the Bangkok Metropolitan Administration (BMA).

Bangkok governor Aswin Kwanmuang said he has teams working on both short- and long-term measures to address the problem.

The BMA will continue to clean roads, pavements and routes where the construction of electric train projects is under way as well as spray water into the air, he said.

"Construction sites will be told to find ways to prevent the spread of dust and people will be banned from burning rubbish or grass outdoors," he noted.

In the long run, electric train construction projects must be expedited to reduce air pollution, he said.

According to the governor, 10,000 N95 face masks will be provided to people in areas where levels of PM2.5 pollutants are high, including Lumpini, Bang Khunthian, Chatuchak and Ratchaprasong. (Report continues below) 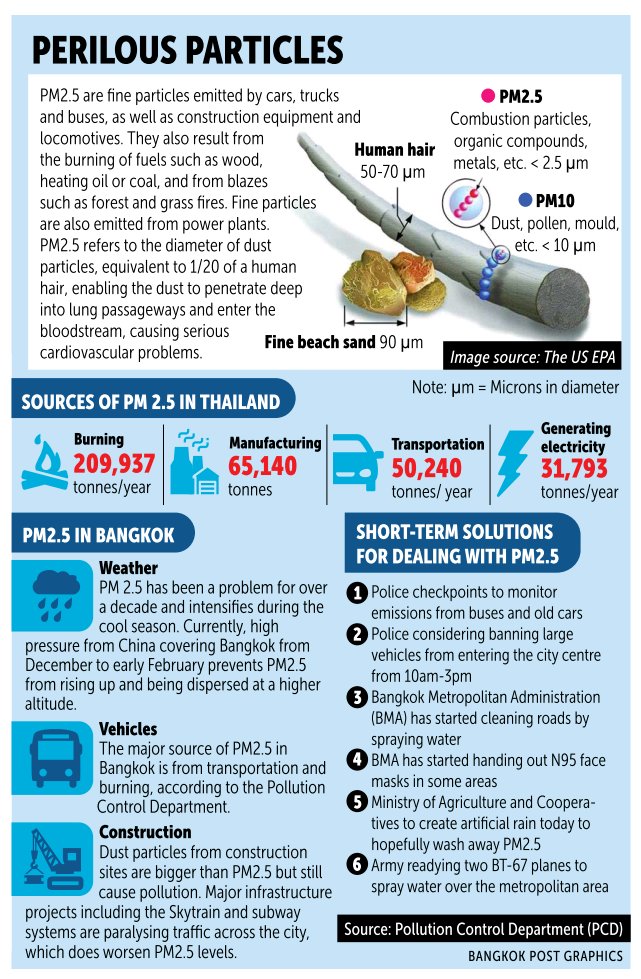 Meanwhile, a meeting of the National Council for Peace and Order's secretariat office on Monday also discussed air pollution in Bangkok. The meeting was chaired by deputy army chief Nattapol Nakpanich.

According to deputy army spokeswoman Sirichan Ngathong, Gen Nattapol instructed officers to map out short-, medium- and long-term plans to deal with the issue.

Manas Kamnerdmanee, deputy chief of the Royal Irrigation Department, said local administrative bodies must inform condo and high-rise constructors to install sprinklers to help clear PM2.5 particles from the air around their sites.

Boonrak Yodphet, secretary-general of the Office of Basic Education Commission, said he had instructed schools in affected areas to avoid allowing students to participate in outdoor activities for the time being.