Fishermen sit on the sand beside their beached trawlers. The local commercial fishery at Samut Songkram has been hit in the past three years after the country was yellow-carded by the European Union. (Photo by Somchai Poomlard)

SAMUT SONGKHRAM: Samut Songkhram is the smallest province in the country, but has been known as a hub for Thailand's fishing industry for decades.

The province has a 23km shoreline, dotted with fishing piers.

Along its roads are food processing plants, and it is only an hour's drive from Bangkok.

Not unsurprisingly, fishing is the most popular profession and almost all the jobs there are related to the sea in some way.

Yet those piers have been quiet recently, and the docks are deserted.

Many seamen sit and wait on the piers for trawlers to hire them out, but work has become scarce.

This stagnation began soon after the European Union issued the country with a yellow card for problems in the nation's fishing sector and the government began imposing tough new protocols in an attempt to have it rescinded. 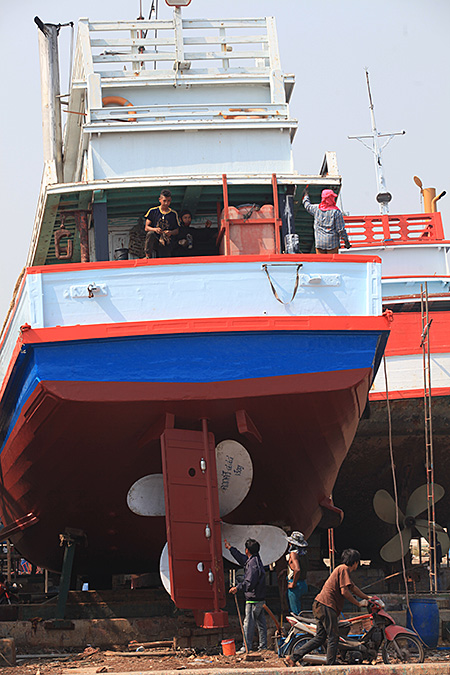 Some trawlers in Samut Songkram province have had to drop anchor after costs rose by 30%.

A yellow card means that a country could ultimately face exclusion of their fish from the EU market.

Commercial trawler owners lament that the government has killed fishing in Thailand.

"The golden age of fishing in Thailand is a thing of the past. The sector is entering its sunset period. I myself am thinking about leaving the industry," said Pongthorn Chaiyawat, an adviser to the Fishery Association of Samut Songkhram.

He said 50% of fishing boats have been decommissioned over the past three years.

Of Mr Pongthorn's fleet of boats, two were recently ordered out of the water due to strict licencing quotas imposed by the government.

He said he is currently waiting for the government to buy them back in accordance with its recently initiated compensation scheme.

"If we look at IUU as a game, the winner is the military-led government. It can claim credit for having the EU's yellow card on Thai fisheries removed. But that victory has been achieved at the expense of the commercial trawler community in the country," Mr Pongthorn says. 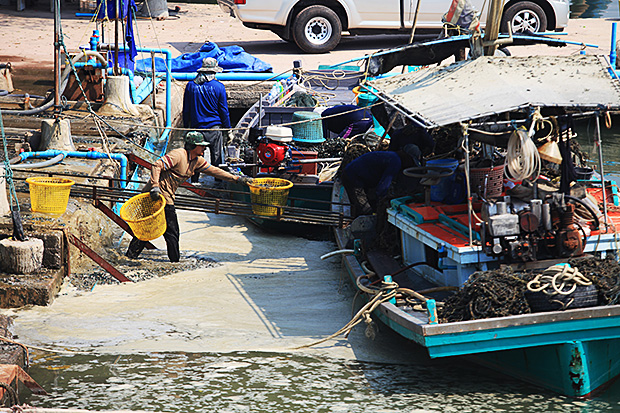 The local commercial fishery has been hit in the past three years after the country was yellowcarded by the European Union.

He warned that the government's measures to appease the EU have not made business sense. Most of the seafood exported to the EU are tuna and shrimp products. Revenue from these exports amounts to about 30 billion baht per year, he said.

However, Japanese traders have taken their business to other countries as the Thai industry has grappled with the toughened regulations.

It is not clear how much the move has cost the local industry economically.

"The capital cost of fishing in Thai waters has increased by 30%. Commercial fishery operators need to spend money on installing Vessel Monitoring Systems (VMS) and face extra costs associated with reporting their yields and activities," he said.

The EU issued the yellow card on April 21, 2015. Since then, the military government had prescribed tough medicine that ultimately paid off when the EU finally lifted the order on Jan 8.

That came after government passed 138 new laws and also imposed catchment quotas which resulted in the delicensing of many boats to prevent overfishing.

The government capped the number of commercial fishing boats at 10,565, resulting in about 10,000 more boats being removed from the system.

Since 2015, the new laws have resulted in 4,448 legal cases involving fishery law violations. About half of them are over boats refusing to install VMS, one of the government's headline measures.

So far, the government has collected over 458 million baht in fines resulting from those cases.

Phairit Cheeranai, deputy chairman of the Fishery Association of Samut Songkhram, said the government needs to help the sector.

"Commercial trawlers are suffering from the impractical regulations prescribed by the government. Now it is time for the government to provide remedies.

"Among the measures that the government needs to revise are the stiff penalties for violating fishery laws that are as high as one million baht even for a minor transgression," he said.

He cited the case of a friend who was fined around 500,000 baht for not providing a Port-In-Port-Out (Pipo) arrival time to an official.

He claimed that his friend had neglected to do so as a member of his crew needed to be transported to hospital due to a medical emergency.

"Unrealistic and impractical regulations are not good for our fishery sector. Some regulations go beyond the EU requirement, such as having observers on board," he said.

Operators must pay 100,000 baht per month for this "service", said Mr Phairit.

Political parties have been quick to seize on an opportunity to gain support as a result of this upheaval.

Nipit Intharasombat, the deputy leader of the Democrat Party, said the party would change the fishery law to provide greater relief.

"Many regulations are too strict. Participation from fishermen is necessary for the sustainable development of the country's fishery sector," he said.