The royal decree calling for a general election, as published in the Royal Gazette on Wednesday.

His Majesty the King on Wednesday issued a royal decree for a general election, which took immediate effect, and the Election Commission can now set a date for the polls.

The decree, countersigned by Prime Minister Prayut Chan-o-cha and published in the Royal Gazette on Wednesday, requires that the chairman of the Election Commission implement it.

The EC is authorised by law to set the polling date and required to set the date within five days of the royal decree being published in the Royal Gazette.

Recently, Deputy Prime Minister Wissanu Krea-ngam said March 24 would be a suitable date, as it would give enough time for election campaigning.

Under the constitution, the general election must be completed within 150 days of the organic law governing the election of MPs taking effect, which occurred on Dec 11, which is by May 9.

Protesters blocked the election at some constituencies and the Constitution Court later ruled the 2014 election unconstitutional because in many electorates polling was not possible on the stipulated day. 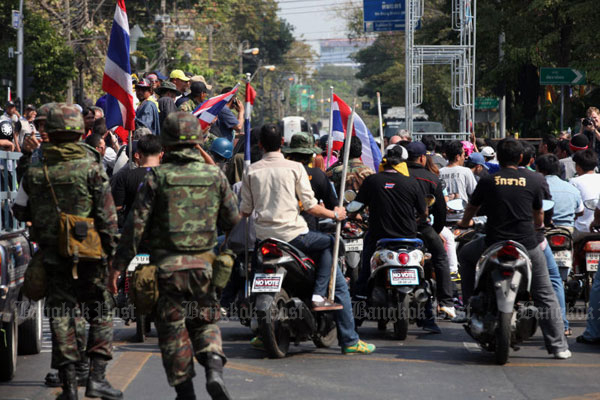 A protest In Bangkok's Din Daeng district during polling on Feb 2, 2014. The Constitutional Court later voided the results because voters in many electorates were unable to cast their ballots. (File photo)