The 32-year-old South Korean computer programmer, escorted by an official from the South Korean embassy, surrenders to Crime Suppression Division police early on Thursday and confesses to colluding with two compatriots in the murder of a fellow South Korean man whose body parts were found on Monday in a forest in Rayong province. (Supplied photo)

A South Korean has surrendered to Crime Suppression Division police and confessed to colluding with two others in the murder and dismemberment of a fellow South Korean whose body parts were found in a forest in Rayong province.

The 32-year-old suspect, Kim Hae-Un (transliterated from Thai spelling), was taken by a South Korean embassy official to surrender to Pol Maj Gen Jirabhop Bhuridej, the CSD chief, and Pol Col Arun Wachirasrisukanya, chief of the CSD’s sub-division 2, around 1am on Thursday.

He confessed to involvement in the murder of a compatriot, Thai media reported.

His surrender followed the discovery of dismembered body parts in Nong Sanom forest reserve, in Ranong's Muang district, on Monday by a local resident.

Two travel bags were later found at a fishing village on Takuan beach in tambon Mab Taphut, about five kilometres from where the body parts were found.

During interrogation, the suspect allegedly told police he was a computer programmer and jointly invested with three other South Koreans, including the victim, in an online football gambling operation.

He claimed Myonghoon had stolen money from them, so his two other partners decided to kill him.

He claimed the other two men murdered and dismembered the victim and he was forced to watch. If he had refused to watch, he would have been killed.

The suspect said he was afraid of being prosecuted for the murder, so decided to contact his embassy for advice before turning himself in to police.

Pol Col Arun said the CSD investigators would jointly investigate the case with local police, ascertain if  other men were involved and, if so, track them down. 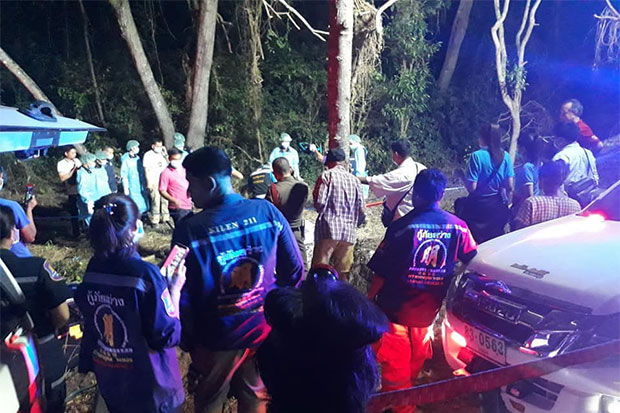 Police, forensic officers and rescue workers at the site where dismembered body parts found in a forest reserve in Rayong on Jan 21. (Photo by Thevathuen Srisopha Facebook page)