LONDON: A footballer with refugee status who has been detained in Thailand for nearly two months over his alleged role in Bahrain's Arab Spring protests is "losing hope", according to a global players' union.

Hakeem al-Araibi, 25, who played for the gulf state's national youth team, fled his homeland and was granted asylum in Australia where he plays semi-professionally for the second-tier team Pascoe Vale FC in Melbourne.

He was detained entering Thailand for a vacation and held "with a substantial number of other detainees... in very trying conditions", Brendan Schwab, executive director of the World Players' Association (WPA), told AFP in London.

"Hakeem is now at a stage where he's losing hope," said Schwab, whose Swiss-based union represents 85,000 players across professional sport through more than 100 associations in over 60 countries. 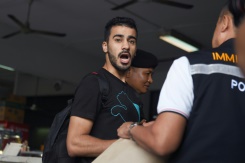 Hakeem Alaraibi, pictured last December in Bangkok, is "losing hope", according to a global players' union

Schwab also urged Fifa's Bahraini senior vice-president Sheikh Salman bin Ebrahim Al Khalifa to "use the power of his office" to win Araibi's release, warning that failure to do so would be "a fundamental breach of his duties".

Bahraini authorities sentenced al-Araibi to 10 years in prison for allegedly helping protesters burn down a police station during demonstrations that swept the Gulf state in 2012.

The footballer, who played for the country's youth team in qualifying games for the Olympics, denied the charges, noting he was playing in a match at the time.

Araibi managed to flee Bahrain in 2013 while he was out on bail. He was detained on arrival in Bangkok on November 27 for a holiday with his wife.

The Australian government, human rights groups and Fifa have all called for Araibi's release, while Interpol has faced criticism for initially issuing the warrant for his arrest, which it later withdrew.

The WPA believes Shaikh Salman -- who is head of the Asian Football Confederation (AFC) and facing a re-election contest for that post in April -- must do more to secure his freedom.

Araibi had spoken out against the Fifa number two in 2016 when Sheikh Salman ran unsuccessfully to be its president.

"Being a member of the Bahraini ruling family he's uniquely positioned to demonstrate that he is someone who deserves to hold high office in the game," Schwab said.

"It's been nearly two months -- the (AFC) has not even issued a statement as to what it thinks should occur.

"Inactivity in the next week or two unequivocally in our view makes his position untenable."

Schwab noted the case is nearing a pivotal point with Thai law requiring Bahrain to submit a formal extradition request by February 8.

Australia's Foreign Minister Marise Payne has also raised the case with Thai authorities, including during a visit to the country earlier this month.

Fifa repeated an appeal to Thai authorities earlier this month for the player's release.

But the WPA, which pressured Fifa to draw up a formal human rights policy in 2017, wants the world footballing body to now uphold its vow to "strive to protect" all such rights globally.

Schwab said the union will file a formal complaint with Fifa's ethics committee if it fails to act more forcefully.

"What we need to occur is for people who hold positions of power within the sports movement to carry out their responsibilities," he added.

...just 25yrs old & already a victim of torture & needed refugee status 4his safety by Australia, his new home. A permanent resident & in the process of gaining his Australian citizenship, #SaveHakeem sits in limbo in a Thai prison, awaiting his fate & possible return 2Bahrain pic.twitter.com/2Dja3pdQcX

“It’s very simple - they just need to release him”

After finding refugee in Australia, Hakeem Al-Araibi is trapped in a Thai prison cell & fearing for his life. @Craig_Foster calls on FIFA to act and #SaveHakeem. #TheProjectTV