A body is brought ashore from the Mekong River in Muang district, Nakhon Phanom province, on Dec 29 last year. Another body was found two days earlier in That Phanom district. (Photo by Pattanapong Sripiachai)

Pol Gen Srivara on Thursday held a meeting with police investigators attached to That Phanom and Muang police stations in Nakhon Phanom province and forensic experts to speed up the investigation into two bodies found along the Mekong River border with Laos in December.

DNA and fingerprint tests confirmed neither of the bodies belonged to Mr Surachai, 78, a political activist who disappeared last month, and no intelligence reports of his death have been received, said Pol Gen Srivara.

The pair were close aides to Surachai Sae Dan -- real name Surachai Danwattananusorn -- a critic of the military and the monarchy. 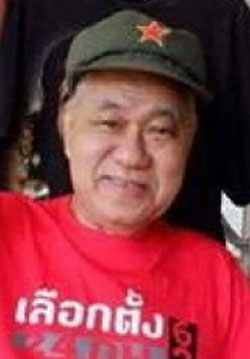 The three political activists disappeared from homes in Laos, where they took shelter after fleeing arrest warrants issued by the military regime.

Surachai's close aides, whose bodies were found on the banks of the Mekong on Dec 27 and 29, were killed in the same manner – handcuffed and strangled with a rope. Their bodies were stuffed with concrete, wrapped in a net and sack and dumped into the Mekong River, which borders Thailand and Laos.

Pol Gen Srivara said a police investigation was underway to find out where and by whom they were murdered.

To date, no other body has been found in Nakhon Phanom, he said.

Police believed the two activists were murdered in Laos before their bodies were dumped in the Mekong River.

Mrs Pranee Danwattananusorn, Mr Surachai's wife, said she had been unable to contact him since December and believed her husband had also been killed and his body concealed or destroyed.

Pol Maj Gen Thanachat Rodkhlongtan, chief of Nakhon Phanom police, said police investigators were leaning towards the theory that the victims were murdered in Laos. He declined to comment on whether the deaths were related to any political group.