Urges drivers to use public buses instead

Greater Bangkok metropolis is shrouded in thick haze that has lingered for weeks. Government has promised measures to curb the smog, mainly caused by vehicles. (Photo by Patipat Janthong)

Prime Minister Prayut Chan-o-cha is urging people in Bangkok to abandon their cars and instead use public transport, saying the haze which has choked the capital is mainly caused by vehicles.

"If they are able to use vehicles less, they should," the prime minister said. "They may also consider boarding electric trains or buses."

Referring to proposals that vehicles more than 10 years old should be banned, the premier said the issue must be thoroughly considered as it concerns different groups of people.

"It does not mean that old vehicles are not qualified. The context of the country needs to be taken into account," Gen Prayut said.

"The [haze] problem comes mostly from vehicles. About 8,000-9,000 vehicles are inspected every day and stickers are placed on those facing a ban," the prime minister said, referring to truck and bus inspections that started recently.

According to him, checkpoints were set up on six key routes leading to Bangkok to screen trucks and buses coming from other provinces.

He admitted that he has to tread carefully before announcing measures that would concern vehicles. 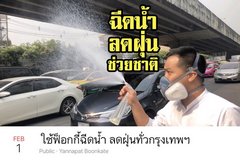 Invitation to a flash mob spray.

The social media call to action was accompanied by a photo of a man in an elaborate face mask spraying mist from a small bottle.

"Reduce the dust all over Bangkok," said the post.

By early Friday, 14,130 Facebook users had promised to appear. An accompanying map suggests participants should meet at the old parliament buildings near the former Dusit Zoo off Ratchawithi Road.

The premier also called on people to share photos of vehicles emitting black exhaust fumes online so relevant agencies can step in to deal with them.

He stressed that public buses emitting black fumes must be decommissioned. "If they are still found plying the roads, they will be spray-painted," Gen Prayut said.

Referring to the two-day school closure, starting Thursday, Gen Prayut said the measure is aimed at safeguarding children who still have low immunity from falling ill.

According to the prime minister, a committee chaired by Deputy Prime Minister and Defence Minister Prawit Wongsuwon would discuss three measures which could be rolled out to combat the haze.

"If a fourth measure is needed, this could be on a disaster level," he said.

He also called on people not to politicise the issue.

Prayoon Choygeo, acting director of the Bangkok Mass Transit Authority (BMTA), which operates Bangkok buses, said his agency would support the use of more environmentally-friendly B20 diesel in all of its vehicles. B20 fuel is a blend that contains 20% biodiesel and 80% conventional diesel.

Of 2,075 BMTA buses, 815 started using B20 diesel on Jan 15 and the rest would start using the same fuel by today, according to Mr Prayoon.

Based on tests of trucks more than 25 years old, the use of B20 diesel reduced black exhaust smoke by 50%, he said.

Meanwhile, authorities are expected to be deployed from today to check factories prone to cause pollution across the country, according to Internal Security Operations Command (Isoc) spokesman Thanathip Sawangsaeng.

Isoc was earlier instructed by the premier to spearhead campaigns to inspect pollutant emissions from factories. Maj Gen Thanathip said officials would zero in on factories that use coal, bunker oil and charcoal in their operations, as well as metal-smelting plants.

He said 50 drones, supported by an agricultural drone club, would be used to spray water to help minimise haze in the capital, adding that City Hall will be responsible for all of the expenses.

A 37-year-old webmaster was arrested at his home in Bangkok for a post claiming that fine dust particles had killed a woman.

He was wanted under an arrest warrant for allegedly sharing false information online that could cause public panic.

Pol Lt Gen Surachate said the suspect posted on his www.bangpunsara.com, meaning "sharing useful information", website that a person had died in Bangkok because of the particulate matter.

The post also showed pictures of a woman with a swollen back, face, neck and shoulder while being admitted at a hospital.

According to Pol Lt Gen Surachate, the post was untrue and the woman had died of another illness.