Ancestors in heaven can now vote

Shopowner Theeraphan Pimpasalee in Muang district of Phichit shows a mock ballot paper available for sale at his shop for people who want their ancestors to vote in heaven. (Photo by Yongyut Phupuangphet)

If your ancestors were political enthusiasts and might want to vote in the upcoming election, they could now do so from heaven.

As the 2019 Chinese New Year approaches, Thai-Chinese descendants are buying items made of paper that represent the things they want their ancestors to use beyond life.

Miniature luxurious cars, full-sized iPhones, iPads and notebooks, all made of paper, are common for the descendants to burn as an offering to them during the occasion.

The Year of the Pig starts on Tuesday. Sunday is the day people go shopping to prepare for the rituals the next day to pay respects to their ancestors. Burning these objects is a key element in the event.

Theeraphan Pimpasalee, a shopowner in Muang district in Phichit, has everything made of paper to offer shoppers, including mock ballot paper that looks like what was unveiled by the Election Commission earlier.

As the general election is due next month, Mr Theeraphan said some people might want their ancestors to vote. The service could help promote democracy in heaven, he added.

The Bank of Thailand has estimated spending during the Chinese New Year to top 62.5 billion baht, a 35% increase from a year ago. But a survey by the University of the Thai Chamber of Commerce from Jan 21-27 found people had spent 58 billion baht, up by only 2.7% from the same period last year, due to concerns over the economy. 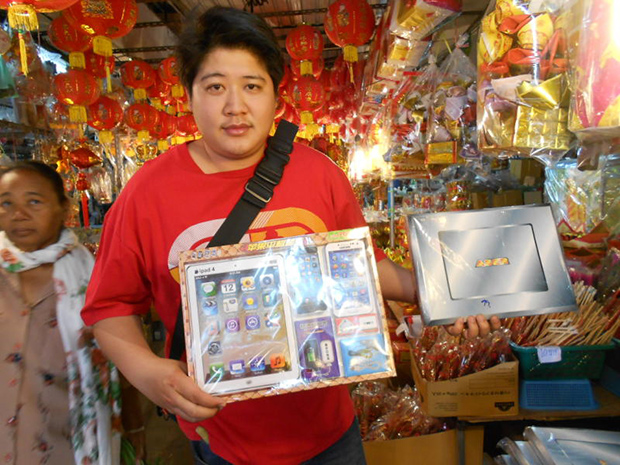 A man in Muang district of Nakhon Ratchasima shows a set of iPhones and iPad to be sent to his ancestors during the Chinese New Year. (Photo by Prasit Tangprasert)

Many vendors have experienced a decline in sales but they hoped spending would pick up on the last buying day on Sunday.

Pranee Tongsamdaeng, who bought items for her ancestors in Khon Kaen, said everything from fresh chicken to fruit was cheaper than last year. "We decided to pay for completed sets to pay respects to our ancestors this year as they are not overpriced," she said. "We hope the Year of the Pig will be a lucky and good one for me and my family."

Srinuan Friedaul, who visited Trang on her way from Vienna to Chiang Rai for a holiday, has another wish for the Year of the Pig. "We want to see all Thais united. I wish the March 24 election will go smoothly," she said.