The Account Takeover Scam: Organised gangs are targeting the elderly and disabled, tricking them via phone calls to hand over their bank accounts.

A new wave of call centre scams is targeting the elderly, according to bank sources.

Criminals are phoning senior citizens and, posing as bank staff or state officials to gain the necessary information to activate online or mobile banking for their victims, who are unlikely to have already done so.

Once up and running, the scammers are able to conduct transactions to and from their victims' accounts at will.

"We call this trick 'account takeover ,' " said a bank cybersecurity expert who asked not to be named, adding that the crooks usually target the elderly and those with disabilities. 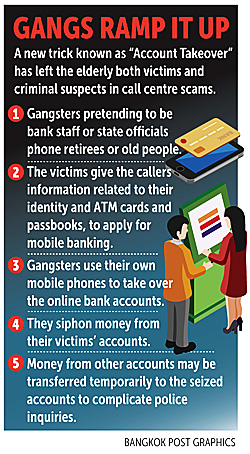 "The problem is causing concern, especially among state-owned banks which are often the recipient accounts of money from government welfare programmes such as monthly allowances for old people," he said.

Pol Gen Rungroj Sangkram, acting secretary-general of the Office of Anti-Money Laundering, told the Bangkok Post these con artists are knowledgeable in financial technology and above all, psychological persuasion techniques.

Previously, scammers "manipulated human greed and fear to profit [from their victims]," he said.

They would implicate their victims in crimes that required a payment to clear up or dangle the carrot of great riches in return for a small investment.

However, these old tricks soon gained notoriety and were less than subtle.

Under their modus operandi, the gangs don't even have to ask their victims to give them money.

They confuse the techno-illiterate, often the elderly or retired, into handing over vital information to allow them to open the online accounts.

That is because after activating the online services, whether on mobile or desktop platforms, the gangsters are able to assume to complete control of that account, said the bank expert.

In fact, the criminals may not immediately withdraw large amounts of money, instead choosing to syphon smaller frequent amounts that are less likely to be noticed, even over a long period of time.

It is not known how long on average the crooks skim money from victims' accounts. 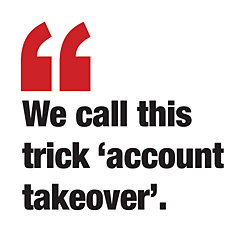 These accounts are also ideal vessels to launder money through, added the expert.

These duped individuals are often unknowing big customers of fake businesses which are used to clean illicitly gotten gains, he said.

"The victims, therefore, can become associated with criminal activities as their names appear in records showing the movement of money acquired through illegal activities."

Though banks continue to come up with technological measures to prevent cybercrime, loopholes involving human behaviour can never be plugged totally, he added.

At present, measures to protect online money transactions against infiltrators are employed to varying degrees among banks.

Only some require mobile banking applicants to use the phone number registered with the account while others allow any number to be given and used during the process, the bank expert said.

Also, he added that online accounts can often be set up without the need to go to an ATM machine or visit the bank.

However, despite his wealth of experience in cybersecurity, he has alerted banks to these issues, telling them to carefully examine applications from senior citizens.

"But the advice fell on deaf ears," he claimed.

"Ultimately, the elderly must be wary of all unsolicited calls from banks and state agencies for the sake of their own safety," said Yos Kimsawatde, head of the Thai Bankers Association's Payment System Office.

Since December 2016, there have been 509 cases in connection with call centre scams, resulting in 467 arrests, according to Amlo and Tactic.