Footage of a CCTV captures Hamid Amiri and Roya Safipouri before they stole cash from a shop in tambon Chandi in Nakhon Si Thammarat's Chawang district.

SURAT THANI: Police have apprehended four Iranians for theft charges after they allegedly stole cash and a clothing iron in the soutuern provinces.

Police intercepted a car driven by Hamid Amiri, 55, at a checkpoint in Sichon district in Nakhon Si Thammarat on Monday. Passengers Ali Dasdar, 22, Valiollah Safipouri, 55, and Roya Safipouri, 31, were also captured at the scene.

Police were on the lookout after an alert that the foreigners had allegedly stolen 2,500 baht in cash from Don Sak Suksaphan shop in Don Sak district of Surat Thani and fled on a white Toyota car on a road to Nakhon Si Thammarat.

The vehicle matched the police report and the driver was ordered to pull over.

Pol Col Sutthi said the shopowner of Pornthip Chandi in tambon Chandi in Chawang district in Nakhon Si Thammarat had also filed a complaint against them for allegedly stealing cash worth 20,000 baht. Another complaint accusing them of stealing an iron had been filed in Ban Na San district in Surat Than but the name of the shop was not known. 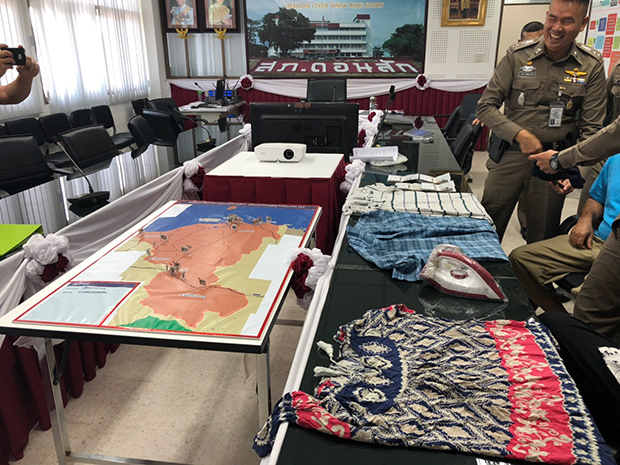 An iron is among the items seized from the four Iranians and shown to the media at the Sichon police station in Surat Thani on Monday. (Photo by Supapong Chaolan)

"I never thought well-dressed foreigners would do something like this," Ms Chaluay said.

Police also seized clothing believed to be stolen items too.

The suspects denied all allegations.

The sedan they used was found to be a car from Pattaya rented on Jan 23.