While some Thai-Chinese descendants have opted to burn fewer incense sticks and less joss paper in order not to worsen Bangkok’s smog crisis, the old generation insists on keeping the tradition. (Photo by Apichit Jinakul)

Like many other Thai-Chinese descendants living in Thailand, Pornthip Thongprasert is looking forward to Chinese New Year, when she can pay respect to Chinese gods and her ancestors. But this year she faces a tough decision. With the hazardous PM2.5 smog that has been wreaking havoc on the city for weeks, whether or not to keep alive the tradition of burning incense sticks, candles and joss papers that would increasingly pollute the air puts her in two minds.

"We really can't skip burning papers and lighting incense sticks," she said. "It is our tradition and Chinese New Year is a once-a-year ceremony. But our family decided to reduce the amount of joss paper offerings. We will burn only half of what we usually do."

Amid the toxic-haze scares that push the public to seek every preventative measure available and even forced schools citywide to close recently, the Ministry of Public Health came out last week and urged people to be part of the alleviation to the PM2.5 crisis during the Chinese New Year by opting for shorter incense sticks and burning less joss paper in order to not make things worse. More than 50% of PM2.5 -- the minuscule particles, less than 2.5 micrometres in diameter -- comes from outdoor burning, according to figures from Greenpeace. Outdoor burning here includes setting incense sticks, gold and silver joss paper offerings and other paper products on fire to welcome the Year of the Pig.

As with the Public Health Ministry's announcement, the Department of Health also warned that the burning of papers and incense sticks could release toxic smoke as well as carcinogens that stem from ashes. This could be detrimental to health and potentially cause short-term symptoms such as eye irritation, dry eyes, coughing, sneezing, breathing difficulty and fatigue, as well as long-term consequences like cancer. The burning of joss paper releases other health-threatening chemicals, including but not limited to sulfur dioxide, nitrogen dioxide and heavy metals.

But despite such serious warnings, clearly not everyone can cut the long-established Chinese traditions. 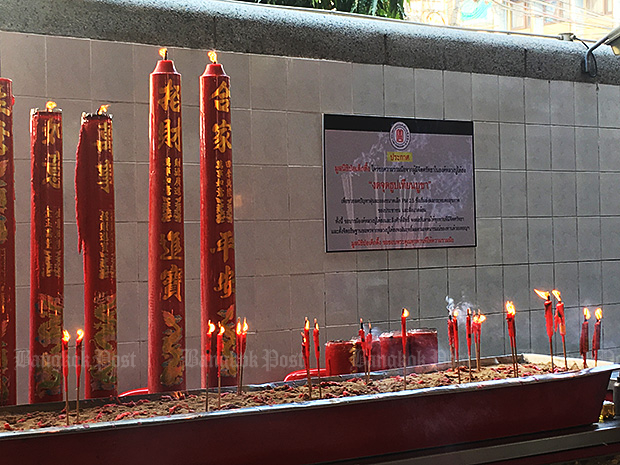 A sign at Tai Hong Kong Shrine in Yaowarat asks visitors to not light candles or incense sticks. (Photo by Suwitcha Chaiyong)

"It was my father's decision, so I believed our ancestors would be fine with it," Pornthip added. "We still have to burn the same amount of incense sticks just like we do every year, but we will use shorter sticks this time."

On a household basis, it could be hard to keep things under control when it comes to the paper-burning ritual -- even with requests from authorities. But at least several temples and shrines have shown their obligation to help with the air-pollution crisis.

Wat Mangkon Kamalawat in Bangkok's Chinatown, one of the largest and most important Chinese Buddhist temples, is usually shrouded by incense smoke, especially during the Chinese New Year, when a large number of Thai-Chinese crowds visit to ward off bad luck. As part of the rite to dispel misfortune, people usually light 15 incense sticks and burn a specially written set of papers. However, the temple has implemented several pollution-aiding measures so that their worshippers will not worsen the PM2.5 problem. 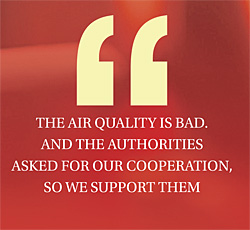 "Even though we can't lessen and control the amount of incense sticks that people burn, we manage to collect and put them out very fast," said a male worker of the temple's protocol. "Also, worshippers don't have to burn papers [at the temple] anymore. We collect them and bring them all to the countryside and get rid of them. We no longer burn papers here."

"In the future, our abbot plans to use incense burners, which he saw in China. The burner can immediately melt incense sticks, but it is still a plan," he added.

Elsewhere, at Tai Hong Kong Shrine in Bangkok's Chinatown and Chao Por Khao Tok Shrine located at the Ruamkatanyu Foundation close to the Hua Lamphong Railway Station, signs have been put up asking visitors not to light candles and incense sticks to avoid polluting the air. And apparently, people have followed the instruction.

"I saw people burn less incense sticks than before. Some people still bring the sticks to pray, but don't light them up. They also said it was fine to pray like that," said Nakwan Sirisawatsomboon, a frequent visitor at Tai Hong Kong Shrine.

"The selling of joss papers has dropped by around 20-30% compared to last year. Some customers told us that they didn't want to burn lots of papers because of the air pollution," said a female shopkeeper at a store on Mangkon Road.

"The sale of firecrackers has also lowered," she said. "But incense sticks remain the same. It is traditional to use incense sticks. People can't cut it."

While the toxic-haze crisis remains unsolved and the government has been unable to keep the persistent smog at bay, it seems collaborations from all parties concerned are most crucial at this point. Chinese New Year revellers are encouraged to abstain from ritual burning traditions not just for the sake of their health but also the environment.

With this, Thai-Chinese descendant Duangphan Viewphukhao could not agree more when she decided to follow the cautionary note from the Public Health Ministry.

"I had been thinking so hard about burning joss papers this year," the 52-year-old said. "At first, I didn't feel comfortable to skip this tradition because I had done it every year for a long time and my life has been going on so smoothly, so I didn't want to change a thing.

"But after I discussed this matter with my mother-in-law, we finally agreed to do what the authorities urged. The air quality is bad. And they asked for our cooperation, so we support them." 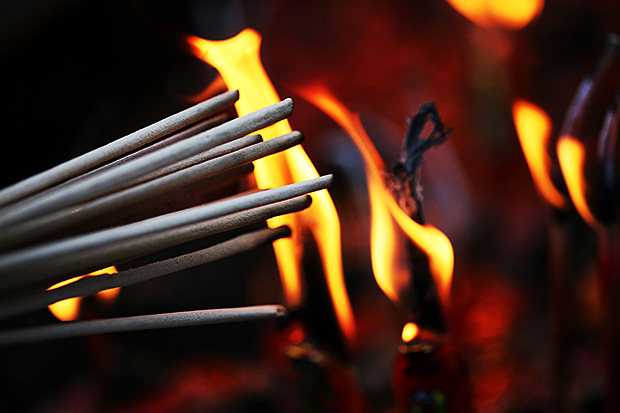