As labourers restarted work on the Orange Line in the Ramkhamhaeng-Hua Mark area, the Mass Rapid Transit Authority of Thailand and contractors set up a hose line to spray water on the dust raised by the construction work. (Photo by Wichan Charoenkiatpakul)

About 600 factories have been ordered to temporarily shut while they reduce emissions of pollutants, according to Prime Minister Prayut Chan-o-cha.

Speaking about measures to combat fine dust particles that have shrouded Bangkok and several provinces, Gen Prayut said more factories may be asked to halt operations for certain periods of time if necessary.

Of 100,000 factories which have been checked, 1,700 were found to be at risk of producing pollution, he said. "An order has been given to suspend the operations of about 600 factories until they improve," said Gen Prayut.

He said he also appealed to the public not to ridicule water spraying by the authorities, saying the practice helps to minimise big dust particles in the atmosphere.

According to the premier, most of the fine dust particles are caused by vehicles and the Transport Ministry has been asked to find ways to ensure vehicles are fitted with exhaust smoke reducing equipment, adding some car owners were found to have removed such devices. 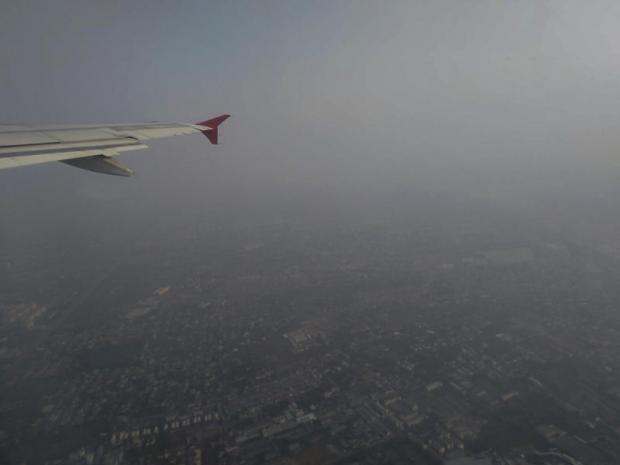 A photo taken from an aircraft shows thick smog blanketing the skies at altitude over Bangkok Tuesday. (Photo by Chanat Katanyu)

However, according to the Bangkok Metropolitan Administration (BMA), haze is likely to intensify from Wednesday until Friday and between next Wednesday and next Friday.

Mobile medical teams will be deployed again on Feb 24. In the meantime, BMA-run hospitals and schools have been equipped with external sprinklers in their compounds to help minimise haze.

In Khon Kaen, administrative and military officers have been dispatched to help clean areas around the construction sites of an electric train project where the air quality index (AQI) score Tuesday reached 162, the highest reading in the country.

An AQI score above 150 is considered unhealthy.

Governor Somsak Jangtrakul said his province had formed a special task force to investigate the causes of air pollution in the area.

They will order constructors of big buildings to install tarpaulins to prevent dust from escaping from the sites, he said.

Sugar cane farmers will also be told to stop slash and burn practices or face the risk of legal action, the governor noted.

LONDON - A replica of an Aston Martin DB5 used for the stunts in James Bond blockbuster "No Time to Die" sold for nearly £3 million (124 million baht) at auction on Wednesday, auction house Christie's said.