Araibi in jail until August

A refugee Bahraini footballer arrested in Thailand while on vacation from his new home in Australia could remain in jail until August while a court decides on an extradition request from Bahrain, a deputy spokesman for the Office of the Attorney-General said yesterday.

Trumph Jalichandra, who is also a deputy secretary-general of the Office of the Attorney-General, said his office received a request from the Bahraini government through the Ministry of Foreign Affairs on Dec 3 last year for the extradition of Hakeem al-Araibi, who fled criminal charges related to the 2011 Arab Spring protests against Bahrain's government.

"The [extradition] request of the requesting country [Bahrain] is from a criminal case whose offence is also considered a criminal offence in Thailand, and the penalties for the charges are more than one year in jail. It is neither a political nor military offence so it qualifies according to the Extradition Act 2008," Mr Trumph said adding that the officers then decided to bring the case to court. 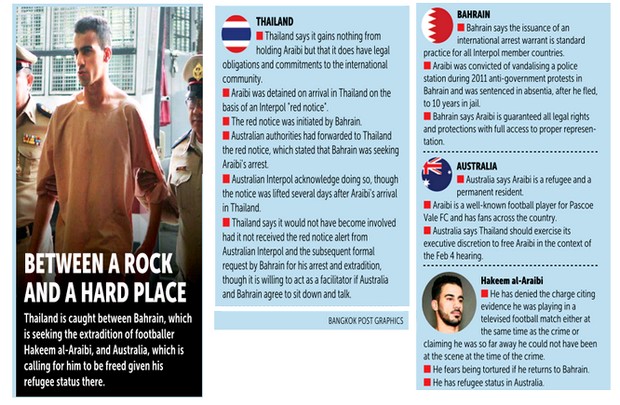 In court on Monday, Araibi denied the charges against him. The court has told him and his lawyer to submit official opposition to the extradition by April 5, and set an appointment for both sides on April 22.

The Thai court hearing the case will need two to three months to give its ruling after the next hearing in late April. "So between now and then, Mr Araibi will have to be in custody at least until August," Mr Trumph said.

Thailand now claims to be caught between Bahrain, which is seeking the extradition of Araibi, and Australia, which is calling for him to be freed given his refugee status there.

The Ministry of Foreign Affairs (MFA) held a press conference yesterday, after issuing a statement.

"Thailand had previously not been aware of Mr Hakeem's case and does not have any prejudice against him. Indeed, we would not have become involved in the issue had we not received the red notice alert from the Australian Interpol and the subsequent formal request by Bahrain for his arrest and extradition," it said.

"It took several days after the arrival of Mr Hakeem, before the Australian authorities informed us that the red notice had been cancelled. By that time, legal proceedings in Thailand regarding Mr Hakeem had already started and could not be reversed," it added.

"The case is now under the purview of the Court of Justice. In proceeding with the legal process, the executive branch cannot interfere with the judicial process. This is an internationally recognised principle upheld by all countries, including Australia.

"Thailand does not gain anything from holding Mr Hakeem in custody. But as a sovereign country that has legal obligations and commitments to the international community, Thailand finds itself in the middle of a case involving two countries competing for Mr Hakeem's custody.

"Under such circumstances, Thailand has no other legitimate option but to cooperate in accordance with the law, and suggest that the two countries, both good friends of Thailand and good friends with one another, talk to each other to sort out their problems and come up with their own solution, instead of trying to find an indirect solution from Thailand, who has only become involved in this case by chance," the statement said.

"We therefore believe that we have a legitimate right to urge Australia and Bahrain to talk to each other and find a mutually agreeable solution. No matter what that solution may be, Thailand stands ready to support it in order to achieve a result that is mutually satisfactory win-win for all." 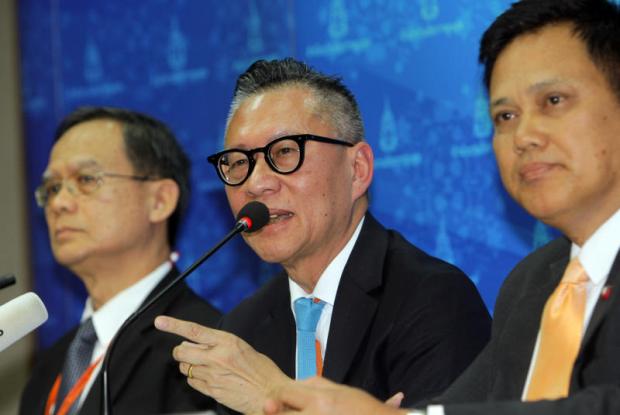 MFA deputy permanent-secretary Thani Thongpakdi said that Thailand and Bahrain have no extradition treaty between the two countries, which led to the use of Extradition Act, 2008, in Mr Araibi's case.

"However, he was convicted on charges of arson and possession of a bomb, which does not constitute a political case and must be proceeded," he said.