Slabs of compressed marijuana seized on the bank of the Mekong River in Bung Kan province overnight are unloaded from a pickup truck for display at a media briefing on Friday. (Photo: Bung Kan Samphan Facebook page)

BUNG KAN: A security patrol seized 510kg of compressed "grade A" marijuana abandoned by smugglers on the bank of the Mekong River in Pak Khat district overnight.

A team of border patrol police and soldiers surprised men unloading sacks from a long-tail boat at Ban Tai village in tambon Nakang. As they moved in, the men jumped back into the boat and fled into the night, leaving 13 sacks on the shore.

They were found to contain a total of 510 slabs of compressed marijuana, each weighing one kilogramme.  The 510kg haul was displayed at a media briefing on Friday.

The seizure stemmed from an ongoing investigation into the smuggling of drugs into Thailand across the Mekong River.

Pol Col Prat Sunthornpimon, superintendent of the 24th Border Police Patrol Unit, told reporters the marijuana was grade A quality, worth about 5 million baht landed. If smuggled to the Central Plains area or the South it would fetch twice that. 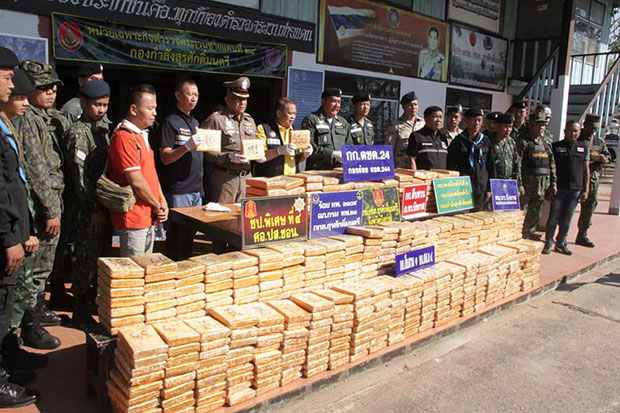