Ex-beauty contestant gets life in prison for murder
Thailand
General

Ex-beauty contestant gets life in prison for murder

Krissana Suwanpitak (left) arrives at the Criminal Court on Wednesday with a companion, for judgement for the murder of her maid in 2012. (Photo by Tawatchai Kemgumnerd)

The Criminal Court has sentenced a former beauty contestant to life behind bars for murdering her teenage housemaid and concealing the body near her mother's house.

The court delivered judgement on Krissana Suwanpitak, 47, on Wednesday, imprisoning her for the premeditated murder of Jareeya Srisak, then aged 15, in 2012, without suspension of the sentence.

Another defendant, Pradthana Thuamsap, 34, was sentenced to one year and four months in prison, and a third, Pramote Suwanpitak, 46, to one year. The case was handled by three public prosecutors.

Pradthana and Pramote helped Krissana conceal the slain girl's body. They received lenient punishment because they cooperated fully with police and state prosecutors.

The court said in its judgement that the evidence against the defendants was substantial, given that Krissana's own daughter saw her mother attack the maid on several occasions and had chosen to testify for the prosecution.

The case entered the media spotlight in 2017 after Jareeya's mother, Janthira, sought assistance from the Paveena Hongsakula Foundation in finding her daughter Jareeya, who had been out of contact since 2012.

Ms Janthira went to the foundation after police in Phetchaburi made no progress in tracking her down.

Crime Suppression Division police then took over the case and finally found her body buried near the house of Krissana's mother, Doro Timpitak, in Muang district of Phetchaburi in 2017. Krissana was arrested in Chachoengsao the same year.

Krissana was a contestant in the Nang Nopppamas pageant and other beauty contests. (continues below) 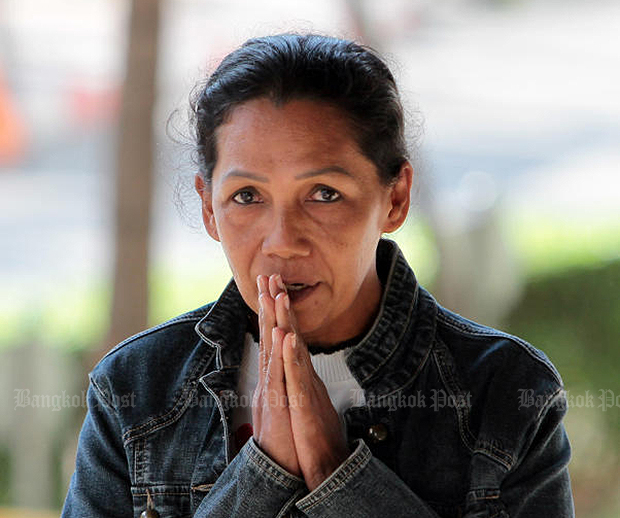 Jareeya was hired to work as Krissana's housemaid in February 2012, according to the court document.

A hot-tempered woman, Krissana had hit Jareeya on the head with a spray can, and about the body with a plastic cylinder, and then burned her with an electric hair straightener, at her house in Bangkok on April 11 of the same year.

The girl was seriously injured and died the following day.

Kirssana took the girl's body to Phetchaburi, where she buried near her mother's house, with the help of the two other defendants.

"I would like to thank the court for justice. The wrongdoer was punished," Ms Janthira said after the ruling.

"Although the defendant did not feel guilty I still forgive her, so that the soul of Nong Nam can rest in peace," she added, referring to her daughter's nickname.

The Criminal Court granted bail for Pradthana and Pramote krub, with surety of 200,000 baht each, pending appeal.

Krissana also applied bail. That will be decided later by the Appeal Court. She was taken to the Women's Correctional Institute for detention.