Police arrested 24 men early on Monday morning for allegedly breaking into Mathayomwatsing School in Bangkok, injuring people and disrupting a university admission examination there on Sunday.

The arrests follow an incident at the secondary school on Ekachai Road in Bang Khunthian district on Sunday afternoon.

A group of men, reportedly under the influence of alcohol, from an ordination ceremony at a house nearby, forced their way into the premises after becoming annoyed by the school management's request to turn down the loudspeakers because the sound was disturbing students sitting the entrance exam.

Twelve people were reported injured - the director of the secondary school, teachers, other staff and students. Some of them, schoolgirls and teachers, were allegedly sexually harassed. 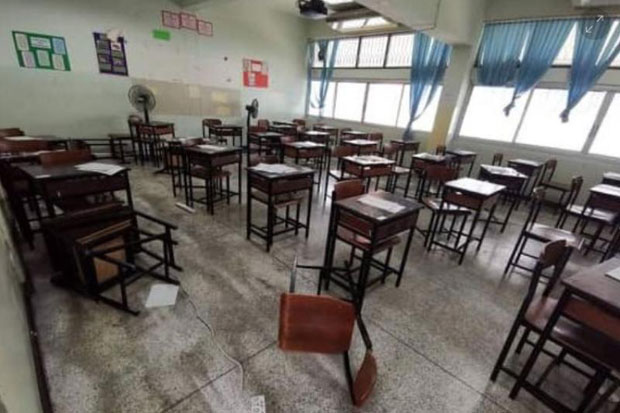 An examination room was damaged during a raid by several men that disrupted the GAT/PAT tests at Matthayom Wat Sing School in Bangkok's Bang Khunthian district on Sunday. (Photo from @redskullhelpcrime Facebook account)