Grab and other ride-hailing services are still illegal in Thailand, but the Tourism Authority of Thailand (TAT) will try to reverse that. (Photo via Grab.com)

The Tourism Authority of Thailand (TAT) and the Land Transport Department will discuss legalising ride-hailing services like Grab as the state seeks to promote this year's tourism revenue target of 3.4 trillion baht, particularly in 55 secondary provinces.

Tarin Thaniyavarn, country head of Grab Thailand, said tourists account for 20% of Grab's passengers in Thailand and it has services in Singapore, Malaysia and the Philippines that are supported by Alipay, which is highly popular with Chinese tourists.

Tourism makes up 20% of Thailand's GDP. Grab will transfer know-how from its Singapore data science team to the TAT and plans to increase driver supply in secondary provinces. Grab Thailand operates in 16 provinces and 18 cities. 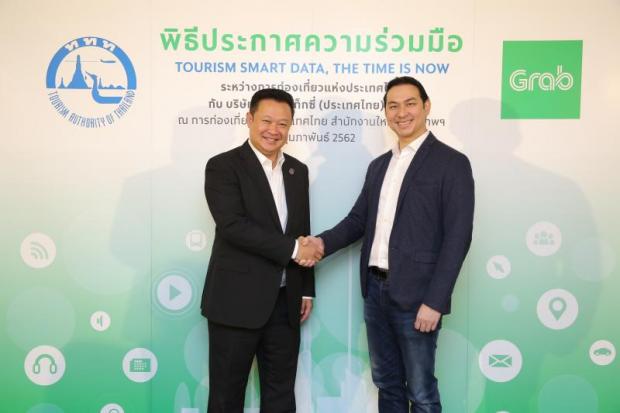 The TAT is partnering with Grab Thailand and investing 40 million baht in a smart data system with accuracy marketing.

"By signing a partnership agreement to use big data with Grab Thailand, we will be able to strengthen the tourism industry because transport is key to visitors accessing experiences and being able to spend," said TAT governor Yuthasak Supasorn.

Grab has data on tourist behaviour, such as preferences for pickup points and destinations that the TAT could use for analytic purposes. The data can be used for marketing to increase the number and quality of tourists.

Apart from exchanging data, the TAT will develop services and run a campaign with Grab.

The TAT will provide special rewards for Grab drivers who receive good reviews from tourist passengers. This will help to boost the image of transport in Thailand, long hindered by dishonest tuk-tuk and taxi drivers.

With Grab's tourist insights, the TAT will be able to better promote travel to 55 secondary provinces because these areas lack data and public transport.

Mr Yuthasak earlier disclosed the TAT's goal in 2019 to raise the travel industry's value to 3.4 trillion baht and increase foreign visitor growth to 10%.