Pratana Patanasiri, vice president for aviation safety, said that as Pakistan had closed its skies the airline had sought and obtained permission to fly through China instead. Services between Bangkok and European destinations were resuming .

Day flights now scheduled on Thursday were TG974 to Moscow, TG916 to London, TG922 to Frankfurt, and TG962 to Stockholm.

THAI would operate flights TG507 and TG508 on the Bangkok-Muscat route on Friday, but they would exclude a stopover in Karachi.

The airline has cancelled scheduled flights TG345 and TG346 on the Bangkok-Lahore route on Friday.

Flight cancellations had left thousands of Europe-bound  travellers stranded at Suvarnabhumi airport since Wednesday. Authorities tried to arrange for affordable hotels and shuttle services near the airport. Some travellers decided to wait there.

There was no information available on flights from Europe to Thailand.

Pakistani closed its airspace as tensions rose between Islamabad and Delhi, with reports of Indian and Pakistani fighter aircraft being shot down. 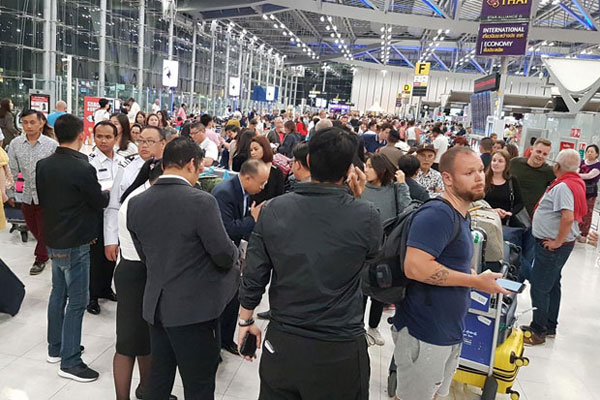 Thousands of stranded travellers mill around at Suvarnabhumi airport in Samut Prakan province on Wednesday night. (Photo by Sutthiwit Chayutworakan)