A map shows the location where a clash between southern insurgents and paramilitary rangers took place in a mountainous area in Rueso district, Narathiwat province, on Saturday morning. One insurgent was shot dead and several others were believed to be injured. (Photo supplied by Waedao Harai)

NARATHIWAT: A suspected insurgent was killed and several others believed to be injured in a clash with paramilitary rangers Rueso district on Saturday morning.

A team of rangers were deployed to the foothill of a mountain in tambon Lalor at around 7am on Saturday and found some 4-5 suspected insurgents gathering there.

Upon seeing the rangers, the men opened fire, leading to an exchange of gunfire for about 30 minutes before the armed men fled.

One man, who has yet to be identified, was shot dead and an M16 rifle seized from him. Utensils and food supplies were found at the scene.

There were traces of blood in the area, suggesting several of the insurgents might have been injured during the gunfire.

More officers were called in to round up the mountainous area and checkpoints were set up along possible escape routes.

The clash came after the 46th ranger taskforce received information from local residents that southern insurgents had been hiding there. 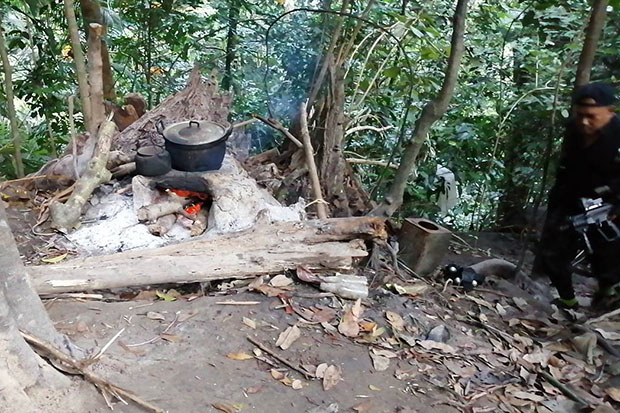 A paramilitary ranger inspects the scene of the clash in Narathiwat's Rueso district on Saturday. (Photo by Waedao Harai)