Thailand made a political commitment Tuesday to reduce marine debris by at least 50% by 2027, according to Prime Minister Prayut Chan-o-cha.

The premier did not attend the opening of the Special Asean Ministerial Meeting on Marine Debris due to an eye infection, but his statement was read out by the master of ceremonies.

"On a national level, Thailand has taken a proactive approach, especially on marine debris, of which 80% is land-based. Thailand has announced a target to reduce marine debris by at least 50% by 2027, through applying the principle of the circular economy," the statement said.

The government has worked to combat plastic marine waste by establishing the Plastic Material Flow Database throughout the country last June, while the private sector is part of the "Thailand Public-Private Partnership for Plastic and Waste Management", or "PPP Plastic".

Gen Prayut stressed that to combat marine debris in Asean, strong cooperation and clear targets are needed, together with a high level of cooperation from the international community. 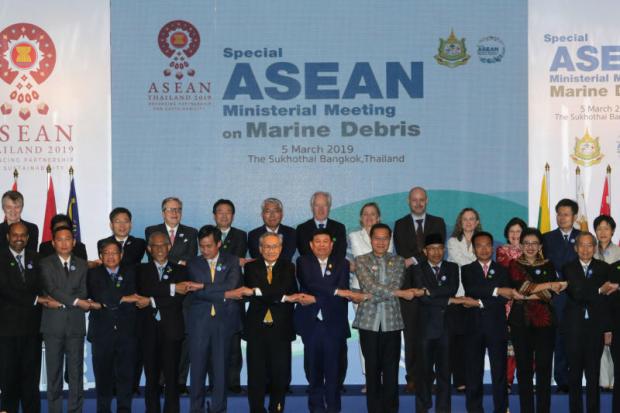 Ministers join hands in a gesture of cooperation at the Special Asean Ministerial Meeting on Marine Debris 2019 in Bangkok, which is scheduled to end today. Wichan Charoenkiatpakul

Asean Secretary-General Lim Jock Hoi said that the issue of marine debris needs urgent regional cooperation to shape policy to eliminate it, adding that 60% of global marine debris originates from four countries in the Asean region.

He also said that the marine ecological system is vital as 19% of the region's GDP comes from marine resources. Consequently, marine destruction causes severe damage to economies, tourism and fishing in the region.

The meeting set a goal to develop a regional action plan, which is expected to be officially endorsed at the Asean Summit in June in Thailand, he said.

"The meeting was very active in discussing the best practices in each country for dealing with the problem," said Gen Surasak Kanchanarat, Natural Resources and Environment Minister.

Thailand also suggested it set up a branch in the Lower Mekong Region as it is one of the world's top 10 contributors of debris into the sea.

Thailand is currently ranked as the sixth worst contributor of marine debris in the world and number four in Asean, after Indonesia, the Philippines and Vietnam.