Karen poacher jailed, officials who hired him let off lightly

KANCHANABURI: A Karen man who said he shot a bearcat in a national park on the orders of "Thai officials" who hired him has been sent to prison for 3 years and seven months.

The officials received suspended sentences ranging from 15 days to 3 months.

They were found in possession of a rifle fitted with a noise suppressor, a pistol, ammunition and four binturong (bearcat) paws, which weighed 920 grammes.

Bearcats are a protected species under the Wildlife Protection Act.

The Kanchanaburi provincial court on Wednesday found Tata guilty of the charges and sentenced him to 7 years and two months in jail.  However, the court later commuted his jail sentence to 3 years and seven months and a fine of 2,000 baht because he confessed to the charges. The jail sentence was not suspended.

The court ordered the seven defendants to pay 561,350 baht in compensation to the Department of National Parks, Wildlife and Plant Conservation.

The court has set April 22 to deliver its ruling on the remaining defendants, who denied the charges.

The rangers quoted him as admitting that he shot a bearcat, but said two men in the group led by Mr Watcharachai, who was then still assistant chief of Dan Makham Tia district, ordered him to do it. 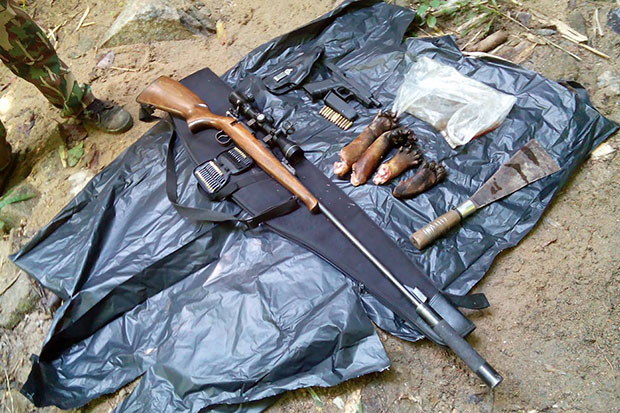 Bearcat pawns and other weapons are seized from those involved in hunting wildlife at Sai Yok National Park in Kanchanaburi on Oct 7 last year. (Photo by Piyarat Chongcharoen)