Jordanian charged with murder of young son in Pattaya

The scene at Laem Bali pier, Pattaya, after the stroller and murdered two-year-old Jordanian boy were retrieved from the sea on Monday evening. The child's father was arrested trying to leave for home from Suvarnabhumi airport on Tuesday morning. (Photo: Tourist Police Bureau)

PATTAYA: A Jordanian man has been charged with premeditated murder after his 2-year-old son was found dead in the sea off Pattaya, tied to a baby stroller.

Wael Nabil Salman Zureikat, 52, was detained at Suvarnabhumi airport around 3am on Tuesday as he was about to board a flight back to Jordan, according to media reports.

His arrest followed the discovery of a dead boy, his legs tied to a collapsible stroller, floating in the sea off  Laem Bali Hai pier in South Pattaya

The tourist was taken back to Pattaya and during interrogation allegedly confessed to having killed his son. He told police he was angry that his wife paid no attention to their son. She often left him to take care of their child alone. Whenever he complained, she became upset and this led to quarrels.

In a fit of anger, he took his son to Laem Bali Hai pier on Friday night, tied the child's legs to the stroller and then pushed it  into the sea, the reports said.

He then returned to their hotel room, where he felt stressed out and regretted what he had done. His wife went looking for their missing son. When she could not find the boy, he still did not tell her what happened, the reports said.

He finally decided to return home, but was stopped at Suvarnabhumi airport. The reports made no mention of the man's wife being with him.

Pol Lt Gen Surachate Hakparn, commissioner of the Immigration Bureau, told a media conference on Tuesday afternoon that on March 10 a Jordanian woman had filed a  complaint with Pattaya police that her young son was missing. She suspected her Jordanian husband had taken him.

Police tracked her husband down  to a rented apartment room in tambon Nong Prue, Bang Lamung district, but did not find their son.

The man insisted he did not know where the boy was.

Evidence from closed-circuit television cameras had shed light to the case, leading evbentually to his arrest as he tried to borad a plane at Suvarnbhumi airport.

The man later confessed to have taken his son for a walk in a stroller before pushing the stroller and his son into the sea, said Pol Lt Gen Surachate.

His wife was not involved in the death of her son. She was depressed and under close medical care, the immigration chief said.

The suspect was being held in police custody for legal action for premeditated murder. He would be taken to court and police would ask for a first period of detention.

Police said at the time there were no bruises on the body. The boy was believed to have died 2-3 days earlier. The body was sent to Bang Lamung Hospital. 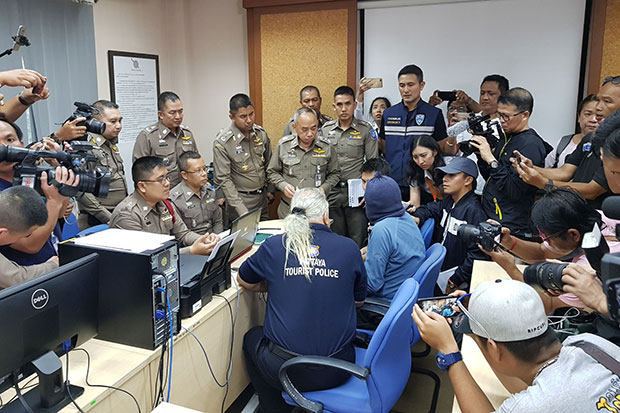 Wael Nabil Salman Zureikat, 52, (hooded) is interrogated by police over the death of his son. (Photo by Chaiyot Pupattanapong)