Bomb disposal officers inspect the scene of the bomb and shooting attacks at a military outpost in Tak Bai district, Narathiwat on Thursday morning. (Photo by Waedao Harai)

NARATHIWAT: Two soldiers and a villager were wounded in bomb and shooting attacks on a military outpost in Tak Bai district. The explosion caused the outpost and a nearby boatshed to catch fire.

The outpost and a nearby boatshed were burned and collapsed following the attacks. Four vehicles, including three pickup trucks and one car, were also burned.

EOD officers found pieces of a home-made bomb were scattered all over the area. The 25kg bomb was put inside a cooking gas cylinder and detonated by radio signal. Pieces of the explosives also fell into the river.

More than 50 spent cartridges from M16 and AK rifles were found scattered over the road in front of the outpost. Pieces of pipe bombs were found about 5m from the area.

A police investigation found that about 5-6 armed men opened fire on the outpost from the back at around 10.30pm on Tuesday. Soldiers inside the outpost rushed to the back to return fire.

Both sides clashed for about five minutes before the assailants fled. But other members of the assailant rode a motor tricycle carrying a bomb stuffed in a cooking gas cylinder to park along the road in front of the military outpost. Shortly later, the bomb was detonated.

The force of the explosion caused shrapnel to hit the boatshed and the outpost before the structures caught fire.

Soldiers at a nearby outpost rushed to to help combat the fire. But the assailants threw two pipe bombs at the officers before fleeing.

Flames spread quickly and burned down the two structures.

The shooting and bomb attacks left three people, including two soldiers and a local resident, injured. They were rushed to a hospital and declared safe.

Soldiers held some residents hired to carry coconuts to boats at a nearby pier for questioning for suspected involvement in the attacks.

Authorities believed the attacks were the work of insurgents wanting to target security officers.

In Bacho district of this southern province, a woman was killed when a bomb targeting rangers exploded on Thursday morning.

The bomb, hidden under piles of wood along the road at Sompoi village, went off shortly after a patrol pickup truck carrying rangers drove past.

All rangers escaped unhurt, but bomb shrapnel and pieces of wood hit Ms Jaemae Sani, 54, who was having a meal with four other neighbours at a roadside pavilion.

The woman was rushed to a nearby hospital but was pronounced dead shortly later. 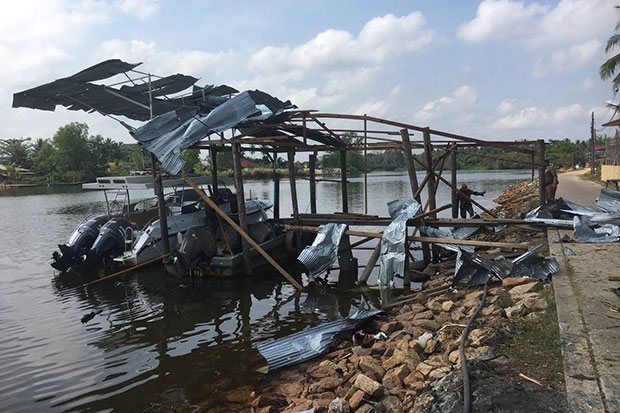 A boatshed near the military outpost in Tak Bai is damaged following the gun and bomb attacks late Tuesday night. Two soldiers and one civilian were injured. (Photo by Waedao Harai)