Ambassador to US Virachai dies at 58
Thailand
General

Ambassador to US Virachai dies at 58

Virachai Plasai makes a point during a briefing as head of the Thai legal team in the Preah Vihear temple case in 2012. (File photo)

Virachai Plasai, a veteran diplomat best known for his role in the contentious Preah Vihear temple case, has died in the United States at age 58.

Virachai, who was appointed as Thailand's ambassador to the United States in June last year, passed away peacefully at Johns Hopkins Hospital in Baltimore just after midnight local time Saturday, according to Foreign Ministry spokesperson Busadee Santipitaks. He had been receiving treatment at the facility near Washington DC since March 3 for myelodysplastic syndrome, a form of bone-marrow cancer, Voice TV reported.

He entered the Foreign Ministry in 1987 as a junior diplomat and rose steadily through the ranks. In addition to posts related to treaties and international economic affairs, he represented the country at the World Trade Organization, and as ambassador to the Netherlands and the United Nations, before taking up his posting in Washington. 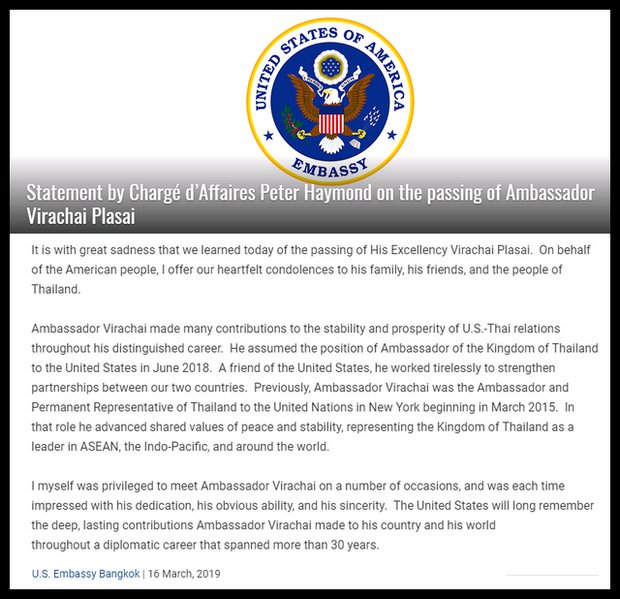 Virachai became a familiar name among Thais in 2012 when he was named to head the Thai legal team in the dispute with Cambodia over the Preah Vihear temple, where ownership had been contested for decades. It had become a flashpoint for nationalists on both sides and the site of occasional military skirmishes.

Thai television viewers became captivated by Virachai’s poise and capability in leading a team of foreign lawyers to deliver oral arguments in the case at the International Court of Justice (ICJ).

The court ruled in November 2013 that while Cambodia had territorial sovereignty over the temple, the two countries needed to negotiate further to determine other issues related to boundaries.

As well, the ICJ said, because the temple was a Unesco World Heritage site, both parties must cooperate with each other and with the international community in protecting it.

Virachai expressed satisfaction with the ruling, calling it a balanced one in which both sides got some of the things they wanted.

In an interview with the Bangkok Post shortly before the ICJ ruling was announced, he reflected on the uniqueness of the experience before the international court.

“I take this as another assignment in my career,” he said. “The only unusual thing is that it is neither a pure legal job nor a pure diplomatic assignment. It is a mixture of both. In fact, no one in this country has ever had this experience for nearly half a century.

“I nevertheless welcomed it, as I like to see myself as a professional football player who takes whatever job the manager entrusts him with, and considers himself lucky for having it.”

Bangkok governor Chadchart Sittipunt has declared assets worth 42.85 million baht including 18.6 million baht worth of land and 10.8 million baht in deposits, according to the National Anti-Corruption Commission.

The internet giant Google has announced its plan to create its first cloud region in Thailand to capture the growing demand for cloud computing services in Thailand and internationally.

The slain Vietnamese woman and Nigerian man found buried in Nakhon Ratchasima province were lovers, and their deaths may be linked to transnational crystal meth trafficking, according to police.

“YourNextU School of Life” announces the launch of a major rebrand