Compensation mooted for family of 'Lady of the Hills'
Thailand
General

Compensation mooted for family of 'Lady of the Hills'

Famiy waits for her final journey

The Justice Ministry is considering financial help for the family of a Thai woman missing in the United Kingdom for 15 years before being identified as the body in a cold-case investigation.

Ministry spokesman Thawatchai Thaikhiew said on Wednesday they were looking into whether the family of Lamduan Seekanya would be eligible for compensation from a fund for victims in criminal cases.

The family might qualify for financial assistance if the case goes to court, the spokesman added.

Lamduan, then 36, has been out of contact with her father, Buasa, and mother, Jumsri, since 2004 after marrying  David Armitage, 55, whom she met in Chiang Mai, and moving to Yorkshire, England. Mr Armitage was an English teacher at Kanchanaburi Rajabhat University at the time.

In the same year she went missing, a woman's body was found by people walking a trail in the Yorkshire Dales near Horton-in-Ribblesdale. Unidentified, the dead woman became known as the "Lady of the Hills". (continues below) 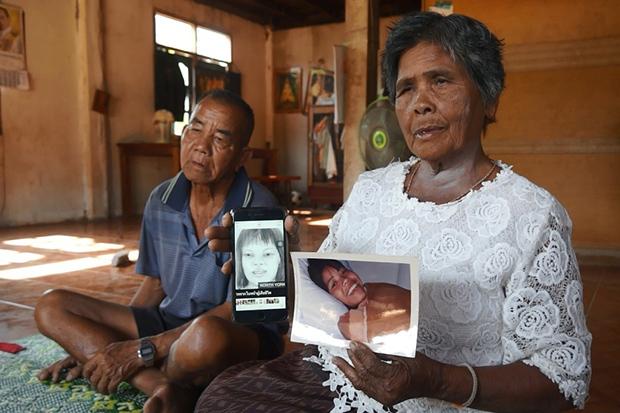 Jumsri Seekanya, with her husband, Buasa, by her side, on Jan 25 shows a picture of her missing daughter, Lamduan, in her left hand and a sketch of the then-unidentified woman whose body was found in Yorkshire in 2004. (Photo by Yuttapong Kumnodnae)

DNA samples of her parents and her fingerprints collected from their home in Phen district in Udon Thani were sent to North Yorkshire police, who were then able to confirm she was the long unidentified woman buried in Yorkshire.

There is no suggestion that Mr Armitage is the subject of any police investigation.

Ms Jumrsi said on Wednesday she was confident the body found in Yorkshire was her daughter. The family was waiting for her bones to be returned home, she said.

Lamduan's parents on Wednesday bought items to be used for a merit-making ceremony for their lost  daughter.

"I am waiting for the bones of my daughter to come home. As for the case, let police handle it," Ms Jumsri added.

Lamduan would have been 51 had she been alive today, she said.

KUALA LUMPUR: Microsoft Corporation will invest $1 billion over the next five years in Malaysia as part of a new partnership programme with government agencies and local companies, the neighbouring nation's prime minister said on Monday.

PARIS: President Emmanuel Macron urged a change in French law after a man who murdered a Jewish woman in 2017 avoided a trial on the grounds he acted in delirium due to drug-taking, in an interview published Monday.

Philippines lifts suspension on AstraZeneca vaccine for under 60s

Discussing Life, Business And Motivation With The Brilliant Gennaro Tella