Fundraising for 'Lady of the Hills' to return home from UK

Jumsri Seekanya (second right) shows a document authorising Setthinari Venes, the Thai Women Network in the UK chairwoman, to handle all ceremonies for her daughter, Lamduan, at her house in Phen district on Thursday. (Photo by Yuttapong Kumnodnae)

A network of Thai women in the United Kingdom is seeking donations to bring the body of Lamduan Seekanya home in Udon Thani province.

The Thai Women Network in the UK is mobilising £5,000 (200,000 baht) from the public on a crowdfunding platform. The proceeds will be used on her cremation and to transport her charred remains to Thailand. They were around £1,350 short of the target as of 7.30pm on Thursday.

"Please help bring her home," the message of the campaign reads.

Lamduan lost contact with her parents in Phen district 15 years ago after she married English teacher David Armitage and moved with him to Yorkshire, England.

In the same year, a woman's body was found by people walking a trail in the Yorkshire Dales near Horton-in-Ribblesdale. Unidentified, the dead woman became known as the "Lady of the Hills".

DNA samples of her parents and her fingerprints were sent to UK police early this year and they matched Lamduan.

Network chairwoman Setthinari Venes met with Thawatchai Thaikhiew, the deputy permanent for justice, at the Justice Ministry, seeking help on documents to facilitate the procedure.

The network will consult Yorkshire police on what needs to be done -- from her cremation to the transport of her ashes for a merit-making ceremony at her home in Phen district, she said.

Yorkshire police have found no evidence she was raped or assaulted, she added. 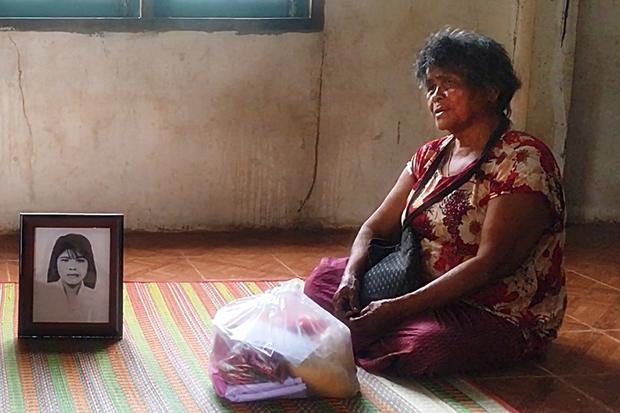 Lamduan's mother, Jumsri, said on Wednesday that she was looking forward to seeing her lost daughter. The Thai ministry is considering financial help for her family.

Justice Minister Prajin Juntong on Thursday asked all agencies to help her family with the case and the transport of her body.

Ms Jumsri on Thursday signed a document with an official representing the ministry to authorise Ms Setthinari to handle all ceremonies on behalf of the parents.

"I will not attend the cremation of my daughter and receive her ashes in England," she said. "My husband and I will wait for her at our house in Phen district for another ceremony," she said.

At least one person was killed and tens of thousands fled their homes as Super Typhoon Surigae made a close approach to the Philippines’ eastern provinces.