Princess Ubolratana (in pink dress) arrives at the wedding reception in Hong Kong. She was greeted by Thaksin Shinawatra (left) and the couple.

Paetongtarn Shinawatra and Pidok Sooksawas, a pilot with a commercial airline, were married at the Rosewood Bangkok Hotel on March 17. The couple held another reception at the Rosewood Hotel in the Chinese territory on Friday, with hundreds of relatives, including former prime minister Yingluck Shinawatra, and guests from Thailand.

Notably, Khunying Potjaman na Pombejra, the mother of the bride, was not present. A source said she had already hosted a reception in Thailand and opted not to come.

Khunying Potjaman and Thaksin divorced after the former premier went into self-imposed exile in 2008 to avoid being jailed on a conviction for abuse of power. Yingluck fled the country in 2017 before her conviction and sentencing for dereliction of duty. 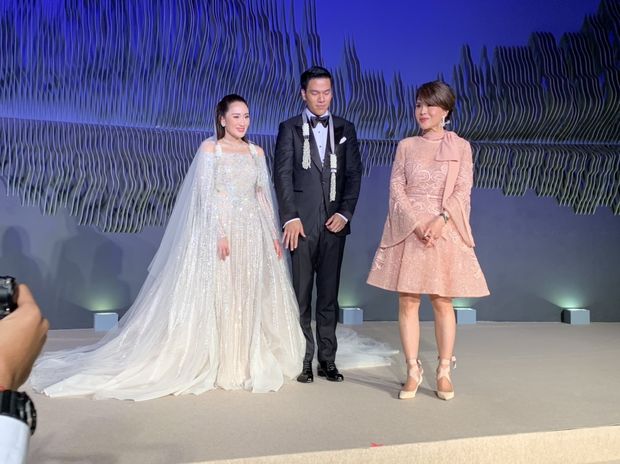 Princess Ubolratana on the stage with the couple.

Among the Thai guests at the Hong Kong reception were friends of the couple, as well as Kachapa Tancharoen, a son of veteran politician Suchart Tancharoen and close friend of Panthongtae, Thaksin’s only son and elder brother of the bride. Mr Suchart, formerly a minister in a Thai Rak Thai government led by Thaksin, is now with the pro-regime Palang Pracharath party. Actress and model Araya A Hargate was also present with her husband, Vissarut Rangsisingpipat.

Tida Tavornseth, a red-shirt leader, was also present at the Hong Kong reception.

During his address, Thaksin said that at first he planned to hold the reception on March 23 but the hotel room was not available. “So I moved the date to today because if we held it after March 24, we’re afraid the room would be jam-packed because we would definitely win,” he said, referring to the general election. 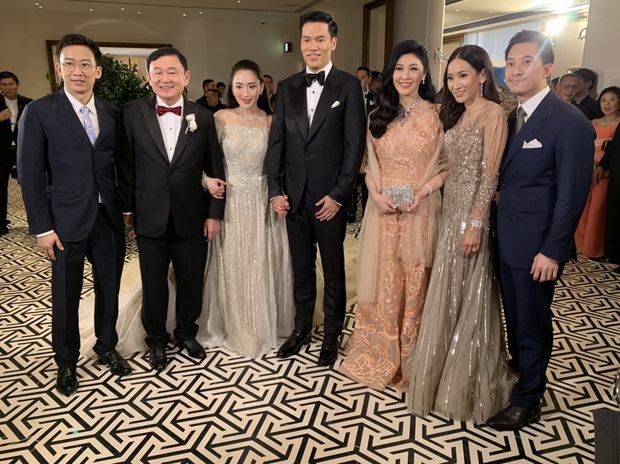