The 1,542 advance voting ballots from Thai citizens in New Zealand could not be counted because they arrived too late, Election Commission chairman Itthiporn Boonpracong said on Tuesday.

“Since the ballots were not delivered to us in time, they could not be sorted and sent to our central vote-counting units outside constituencies, which are designated for the purpose. The committees at the central units have already finished counting the votes and the results have been announced,” the EC said in a statement.

The EC set up a panel to investigate the causes of the delay and report back in a week, he said.

His comment came after the Ministry of Foreign Affairs on Tuesday issued a statement outlining what happened.

The ballots were sent on time by the embassy, but delayed at air cargo warehouses in Auckland, New Zealand, the ministry said.

It had earlier worked with the EC and Thailand Post in setting joint guidelines for the delivery of the ballots from overseas advance voting. The delivery deadline was set at 8pm on March 23, the night before polling day.

The ministry said there were several procedures to ensure tight security in the deliveries.

The Thai embassy had dispatched the sack of ballots from Wellington via Air New Zealand on March 18, and it arrived in Auckland the same day. The ballots were due to depart on Thai Airways International flight TG 492 on March 19. The sack was delivered to a THAI cargo warehouse in Auckland on March 21.

On March 22, the Thai embassy contacted airline staff and was told that the sack was not shipped via a THAI flight on March 21 or 22. At the time, staff could not check the tracking status of the package because THAI cargo was closed, the ministry said.

On March 23, cargo staff had contacted the embassy and advised that the sack containing the ballots had departed Auckland on flight TG 492 to Bangkok at 3.03pm (local time) on March 23, and was due to arrive in Thailand at 8.50pm (Thai time).

That evening, the ministry had checked and was notified the bag would arrive at Suvarnabhumi airport at 8.50pm. However, that was beyond the delivery deadline for overseas advance votes.

The ministry consulted the EC and Thailand Post and was advised that the ballots from New Zealand could not be delivered to polling stations on time.  Therefore, the ministry did not collect the bag containing the ballot papers from the cargo warehouse on the night of March 23, the ministry said. Ministry staff picked up the sack on March 24, and delivered it to the EC the following day.

Earlier, Sumeth Damrongchaitham, president of Thai Airways, said the airline had followed EC protocol rigorously. The sack of ballots from New Zealand arrived at Suvarnabhumi airport at 8.50pm on Saturday.

The airline had contacted the ministry at 5pm that day, well before before the flight landed, to advise of its scheduled arrival and that the bag could be collected from the air cargo warehouse between 10pm and 10.30pm. However, no one from the ministry arrived to get the bag that night.

Ministry staff picked up the sack from the cargo warehouse at 7.30pm on March 24, the THAI president said. 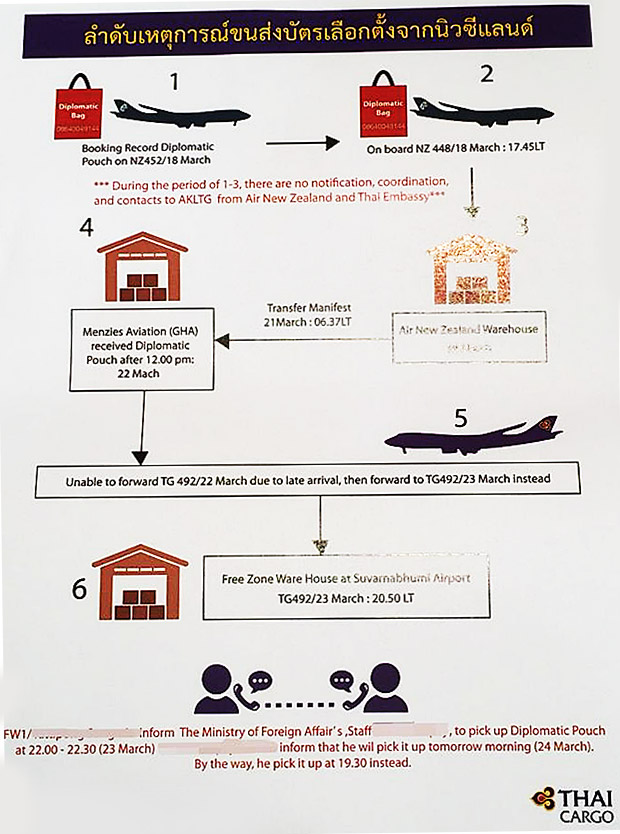