A young woman holds her ballot paper as she waits to vote in Watthana district of Bangkok on March 24. Inconsistencies in turnout and the number of ballots cast mean voters at six polling units will have the chance to cast their ballots again. (Photo: Patipat Janthong).

The Election Commission (EC) has ordered election re-runs at six polling stations in five provinces including Bangkok, and the recounting of votes at two stations in Khon Kaen province.

Sawaeng Boonmee, deputy secretary-general of the EC, revealed the commission's decision after a meeting on Thursday.

Voting will be re-run at six polling stations -- in Bangkok, Lampang, Phetchabun, Phitsanulok and Yasothon provinces -- because the number of voters who turned up did not match the number of marked ballot papers.

Mr Sawaeng said recounts were needed for two polling booths in Constituency 3 in Nam Phong district of Khon Kaen because the first counts were inconsistent with the number of voters and marked ballots.

He said the recounts could be done at once, and dates for election re-runs at the stations would be set after the Songkran holiday in mid-April.

The number of votes counted at booths that will have re-runs have now been nullified, and the number of party-list MPs will be re-calculated after the re-runs, Mr Sawaeng said.

According to unofficial results released by the EC, Thitipat Chotedechachainan, a Palang Pracharath Party (PPRP) candidate, is the winner in Bangkok's Constituency 13, bagging 27,489 votes.

Mr Treerat said having re-runs at a few polling booths would not fix the problem because there were alleged irregularities at more than 22 stations in Constituency 13, in Bang Kapi district alone.

Ms Thitipat said she was not worried about the re-run because she beat the runner-up by over 3,000 votes, while there are only about 700 eligible voters at the polling station ordered by the EC to hold a re-run.

She welcomed the EC's decision so that any suspicions could be laid to rest.

Buddhipongse Punnakanta, the PPRP's chief election strategist for Bangkok, said the re-vote would not affect its candidate's victory in the constituency.

The number of eligible voters at the polling booth was low while the party's candidate beat the runner-up by a margin of more than 3,000 votes, Mr Buddhipongse said.

Previously, the Pheu Thai and Future Forward candidates running in Bangkok's Constituency 13 filed complaints with the EC asking it to recount the votes at some polling stations.

The candidates complained there were irregularities such as the number of voters who cast ballots being fewer than the number of ballots cast, and there was not enough light when some of the votes were counted at some station.

Parit Wacharasindhu, a "New Dem" who came fourth in Bangkok's Constituency 13 (17,958 votes), said he was ready to hit the campaign trail after the EC sets a date for the re-run.

Mr Parit, a nephew of former Democrat Party leader Abhisit Vejjajiva, said people who voted on March 24 may now have had a change of heart over their choice of election candidate for the re-run.

He said this re-run must be treated with as much gravity as the original poll as every vote counts, and they will be used to calculate the number of party-list MPs each party gets. 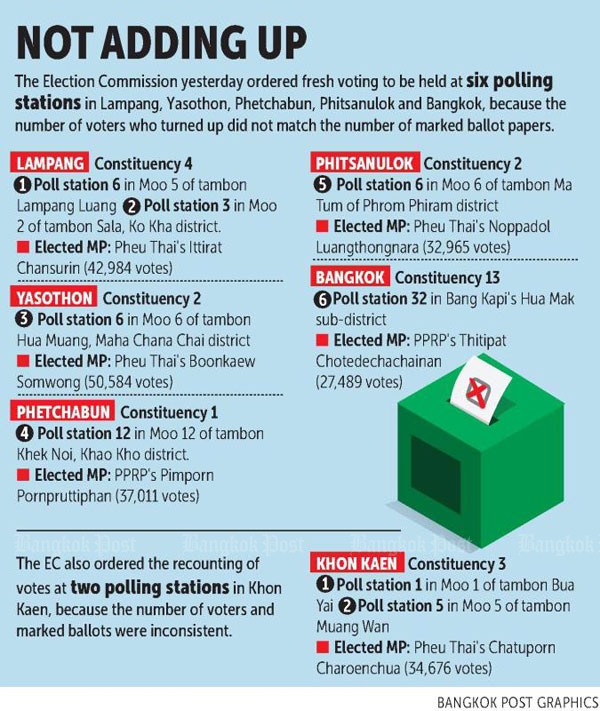