Officers collect DNA samples from young men registered for military conscription in the far South. The Yala task force commander confirmed their DNA records will be included in the security database. (Photo by Abdullah Benjakat)

YALA: DNA samples collected from young men registered for conscription this year in the far South will be included in the security database, the commander of the army's Yala task force said on Friday.

Col Chalat Sriwichian said this year, for the first time, DNA testing had been part of the conscription process. The southern border provinces of Yala, Pattani and Narathiwat and four districts of Songkhla were selected for the pilot project.

The DNA records would be included in the security database of conscripts living the far South, he said.

It would later be expanded to cover other provinces.

He was responding to comments on social media about whether the collection and testing of DNA samples from military conscripts in the deep South was lawful or not.

The Yala task force commander said there had been unrest in the southern region for the last 15 years and it was necessary to gain the confidence of the people that evidence used to bring those responsible for the violence to task was accurate. Forensic evidence, particularly DNA tests, was necessary and important, he said.

Enforcement of the law in recent years had led to the detention of a number of southern insurgents and their sympathisers, Col Chalat said.

“DNA tests were conducted four days ago during conscription in each area in the southern border provinces. We did not force our young brothers to undergo DNA testing, but explained and created understanding about it.

"They cooperated and undertook the tests voluntarily. In some areas, some young brothers did not want to undergo DNA testing and we did not do it. We think that explaining the reasons for taking DNA samples and then letting them decide whether to cooperate voluntarily is better,’’ he said.

In Yala,  a total of  3,677 young men registered for conscription this year. Less than 1% of them did not want to give a DNA sample for testing, Col Chalat said.

Just because they did not agree did not mean they were suspects in security cases. But officers responsible for security may have doubts about why they refused.

Security officers based in the deep South, particularly volunteer rangers and defence volunteers, were also asked to undergo DNA tests. Their weapons were also examined forensically, he said.

DNA tests would be useful in proving their innocence in the event of allegations that some attacks were the work of the security forces themselves, the task force commander said. 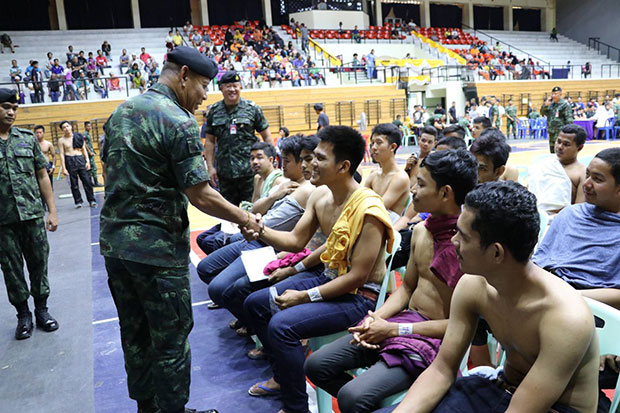 Young men register for the draft in the deep South this year. (Photo by Abdullah Benjakat)