Man arrested for rape, murder of German tourist on Sichang

Suspect Ronnakorn Romruen, 24, was taken to Koh Sichang police station in Chon Buri and charged with the rape and murder of a 27-year-old German tourist whose body was found on Sunday night. (Supplied photo via Wassayos Ngamkham)

CHON BURI: A 24-year-old man has been arrested for allegedly raping and murdering a German tourist, 27, whose body was found covered with dry leaves under rocks on Koh Sichang on Sunday night.

The body of the German woman, whose name was withheld pending notification of her relatives, was found lying under rocks with severe head injuries, said Pol Col Angkoon Sarakul.

A tourist looking for locations to take photos on the tourist island off Si Racha stumbled on the body and alerted the police at about 8pm on Sunday evening.

Police scoured the island for the murderer and found a man who they said was acting suspiciously.

Ronnakorn Romruen, 24, a native of Koh Sichang district, was taken for questioning. After three hours of interrogation, police said, Mr Ronnakorn admitted to having murdered the tourist.

According to the police investigation, the suspect said he saw the victim riding a rented motorcycle on the island. He tried to start a conversation with her, but was rebuffed.

He then followed her to a rock path leading to Phra Chulachomklao mountain and Assadang flagpole, police said, where he raped her. Afraid she might alert police and identify him, he then killed her.

Police have charged Mr Ronnnakorn with murder, rape and concealment of a body. He was held in police custody at Koh Sichang police station for legal action. 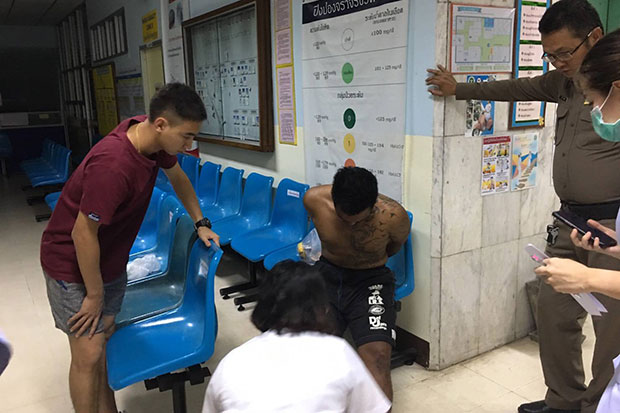