The supplied photo shows the restaurant, the manager of which has complained about stalls selling sex toys blocking access and deterring potential customers, in Silom area, Bangkok.

A restaurateur on Silom Road on Wednesday asked the Crime Suppression Division for help removing stalls selling sex toys and stimulants in front of his premises, saying his complaints to local police and officials had gone unheeded.

Dechapong Chantarusorn, 35-year-old manager of Sunrise Tacos & Grill restaurant, complained to CSD superintendent Pol Col Thongchai Yuket that the stalls on the footpath outside his restaurant on Soi Silom 4 restricted access and deterred would-be diners. His business was suffering.

City inspectors and police in Bang Rak district had not responded effectively to his past complaints, he said.

Mr Dechapong said he rented the premises and had been operating his restaurant for about five years. Shortly after its opening, stalls were set up in front of it, and this immediately affected his business. He had tried asking the vendors to move away but to no avail. They said they had been selling there for a long time.

The stalls disappeared for a short time when authorities imposed order on the footpath, but that did not last and before long they moved back there again, he said.

"Recently, I was threatened when I tried to talk with them... When officials arrived, the vendors claimed they rented the front pavement area from my restaurant. That is not true. I am afraid that some influential people are behind the stalls," Mr Dechapong said.

Pol Col Thongchai said he would investigate the matter and discuss it with Bang Rak district officials and police. 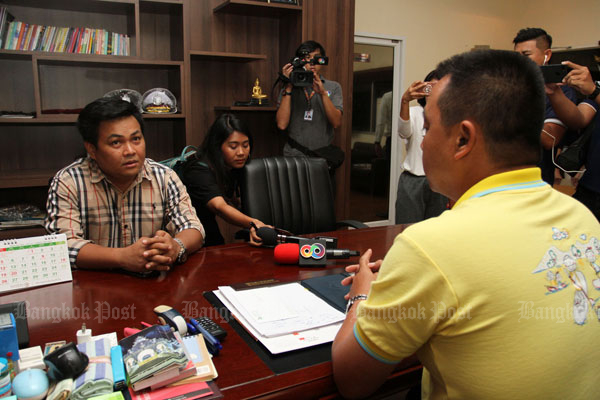