Daycha Siripatra, chairman of the Khaokwan Foundation, is warmly received at Don Mueang airport as he returns from Laos on Wednesday. (Photo by Pornprom Satrabhaya)

Daycha Siripatra, chairman of the Khaokwan Foundation, has insisted that distribution of cannabis oil extracts to patients with cancer, Parkinson’s and other diseases is a moral act.

Mr Daycha spoke after his returned from Laos on Wednesday following a raid on his foundation in Muang district of Suphan Buri last Wednesday. Polce seized marijuana plants, medicines and equipment used to extra cannabis for oil and arrested Daycha’s assistant Pornchai Choolert.

The foundation chairman thanked people for coming to Don Mueang airport to welcome him on Wednesday.

He said he was sorry he was unable to return home earlier to apply bail for Mr Pornchai, a staff member of the foundation, but he was engaged in a mission in Laos where he was invited to exchange views with folk healers.

Mr Daycha insisted the distribution of cannabis oil extracts for treatment of cancer, Parkinson’s, arthritis, epilepsy and other diseases was a moral act that stood above outdated laws and regulations. Patients’ access to medicines and treatment were basic human acts, he said. 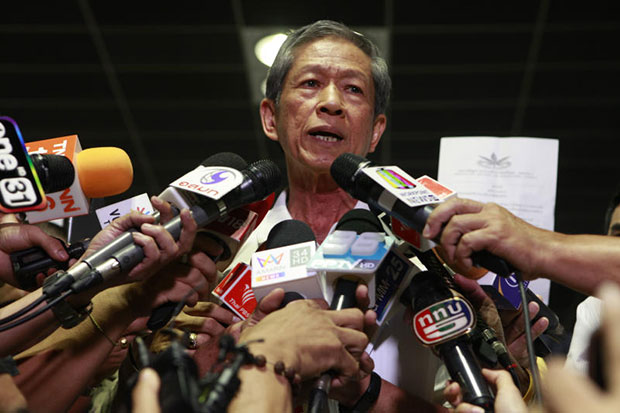 The Public Health Ministry rejected his foundation's application for amnesty on Tuesday, saying that there must be evidence showing that the foundation had possessed marijuana, said Mr Daycha.

“Officials said those who apply for amnesty must have evidence showing that they possess marijuana. But police have already seized our plants. They also claim that the foundation has no evidence proving that I am a folk healer deserving protection from the law despite the fact that the foundation produced a letter issued by the Thai Holistic Health Foundation, an association of folk healer networks across the country,’’ said Mr Daycha.

The foundation chairman said he has been a folk healer and used herbal medicines to treat the sick for more than 20 years.

“On top of promoting sustainable agriculture with no use of chemicals and educating people to improve rice varieties, I have performed my duty as a folk healer to promote herbal plants with nutritional value for food and medicines for more than 20 years. I have written articles about these issues in Technology Chao Ban (local people’s technology) and Mor Chao Ban (folk healing) magazines. This is clearly evident,’’ said Mr Daycha.

He stood firm that all folk healers had the right to receive permission to produce medicines from marijuana to treat people.

Mr Decha said he and his team of lawyers will meet the Office of the Narcotics Control Board on Thursday and coordinate with police to set a date for him to hear the charges.

He thanked people for their donations for bail for Mr Pornchai's bail application and their participation in campaigns to call for people’s access to marijuana for medical purpose. 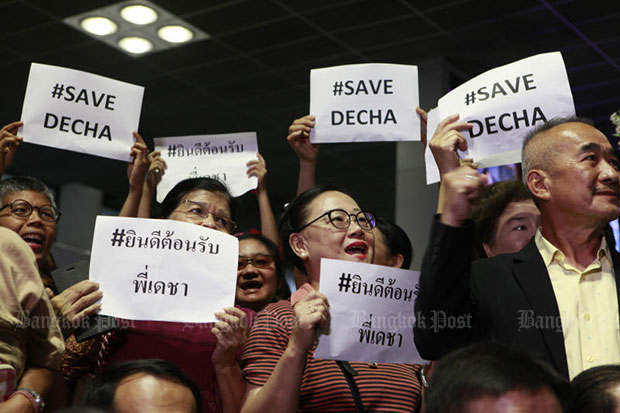 Supporters of Daycha Siripatra, chairman of the Khaokwan Foundation, greet him at Don Mueang airport as he returns from Laos on Wednesday. (Photo by Pornprom Satrabhaya)