A motorcycle falls after it is hit by an oil tank lorry in Muang district, Trat province on Friday. The motorcylist driver was hurt and rushed to a nearby hospital. (Photo by Jakkrit Waewkhlaihong)

Forty-six people were killed and 482 injured in road accidents across the country on the first day of the "seven dangerous days" of Songkran holiday travel.

Like in previous years, the most common cause of road accidents was drinking-driving (34.6%), followed by speeding (26.9%). Most crashes involved motorcycles (78.47%), said the minister.

Police and officials have set up 2,036 road checkpoints across the country during Songkran. A total of 709,464 vehicles were stopped at the checkpoints, with 163,584 motorists facing legal action for traffic rule violations. Of the offenders, 45,230 failed to wear crash helmets and 41,485 drove without licences.

Courts of justice spokesman Suriyan Hongwilai said a total of 1,609 cases involving road traffic violations, were sent to lower courts on Thursday. The lower courts have already ruled on 1,609, or 73.8%, of the cases.

Most of the cases involved drink-driving (1,106), followed by driving under the influence of drugs (314). Others were driving without licences.

There were 1,704 defendants prosecuted in the courts. They included 1,661 Thai nationals and 43 others were foreign nationals, said the Courts of Justice spokesman. 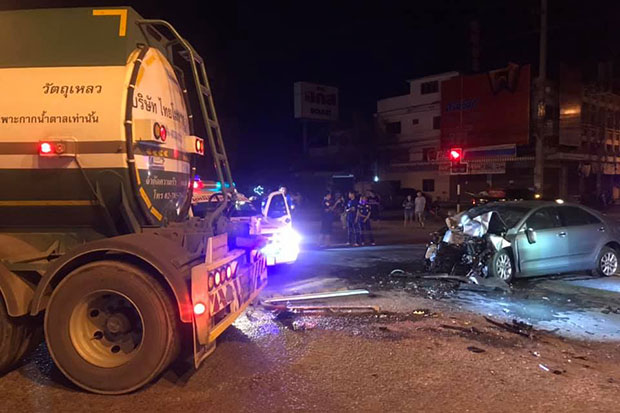 The wreckage of a car and a lorry after a crash in which a Dutchman was killed in Kanchanaburi province early on Thursday. (Photo by Piyarat Choncharoen)