This floating living platform, built off the coast of Phuket by an American man and his Thai wife, will be removed within one week, says the Third Navy Area commander. (Supplied photo via Achadtaya Chuenniran)

Authorities have filed a complaint with Wichit police station over the floating platform set up in international waters southeast of Racha Yai island, said Vice Adm Sitthiporn Maskasem, commander of the Third Area, during a media briefing on Wednesday.

Representatives from concerned agencies met to discuss legal procedures to be taken against those who set up the floating structure, said Vice Adm Sitthiporn.

In the police complaint, authorities accused American national Chad Andrew Elwartowski and his Thai wife, Supranee Thepdet, with an English alias of Nadia Summergirl, of breaching Section 119 of the Criminal Code.

The section concerns acts that cause the country or parts of it to fall under the sovereignty of a foreign state, and deterioration of the state's independence.

“The complaint has been filed against them for breaching Section 119 of the Criminal Code as there is evidence showing that they have publicly invited people on social media to stay at the site, which is adjacent to our territorial waters...we have laws to deal with this. It affects our sovereignty,’’ said the Third Naval Area commander. 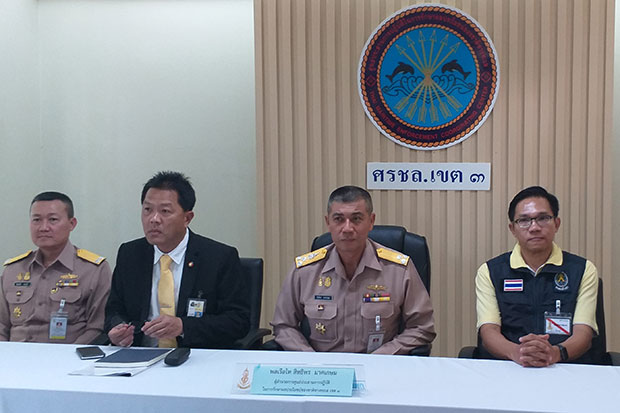 Officials hold a media briefing about a plan to remove the floating living structure 12 nautical miles off the coast of Phuket. (Photo by Achataya Chuenniran)

Preparations were already made to remove the floating structure from the sea as soon as possible, he said.

The structure hindered shipping navigation since fishing trawlers and cargo vessels ply the route to transport goods to Phuket, he said.

“We have already prepared a vessel, equipment and manpower to move the structure. We will try to move it within a week’’ said Vice Adm Sitthiporn.

An investigation found that the man had run a Bitcoin trading business and wanted to set up an independent nation by exploiting legal loopholes, said the deputy governor.

The pair reportedly aimed to set up a permanent shelter out of any state territories by exploiting a loophole in the United Nations Convention on the Law of the Sea.

The practice of attempting to establish micronations that claim to be independent but are not recognised by world governments or major international organisations is expanding globally, particularly among those who become rich from cryptocurrency trading, according to officers.