New Economics Party leader Mingkwan Sangsuwan yesterday insisted the party would not jump ship and join the Palang Pracharath Party (PPRP) in a coalition government, as the party dismissed a claim by several party members it was being dominated by outsiders. 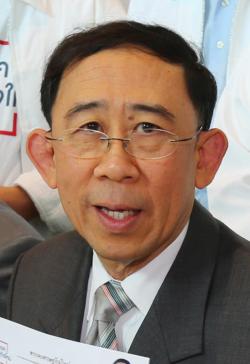 During a press conference, Mr Mingkwan said he bore no personal grudges against the PPRP, but they had different political ideologies and he had already pledged support for Pheu Thai.

He also insisted there were no renegades in his party looking to break ranks and vote for Prime Minister Prayut Chan-o-cha -- the PPRP's prime ministerial candidate -- to return as premier.

"Some say there are ngu hao [cobras] in the party and that the party is in talks with the PPRP. I can declare this is all untrue. We're with the Pheu Thai Party," he said.

Deputy party leader, Supadit Arkhatruek, yesterday also dismissed as untrue an allegation that the party was dominated by outsiders who prevent it from freely conducting its activities.

Three constituency MP candidates called on the Election Commission (EC) on Thursday to dissolve their own party for allowing non-party members to dictate political activities. They urged the EC to investigate the matter and suspend the announcement of the party's vote results.

According to Mr Supadit, the individuals alluded to in the petition are party members, not outsiders as alleged. He said those seeking the party's dissolution were violating party regulations and action was being considered.

Deputy Prime Minister, Wissanu Krea-ngam, said yesterday it is not easy to dissolve a political party and the process is usually a lengthy one.

In the complaint surrounding the New Economics Party, he said there must be solid evidence to prove three elements -- an outsider exists, interference by the outsider, and interference in the party's activities.

"Activities means things that executives or party members have to decide. Outsiders can't intervene," he added.

Buddhipongse Punnakanta, a PPRP member, yesterday refused to say whether the New Economics Party would join its coalition and insisted the bid to seek its dissolution had nothing to do with the PPRP.

He said the PPRP's participation in the election should put an end to allegations the regime was trying to cling to power and the millions of votes won by the PPRP were an endorsement of Gen Prayut as the party's prime ministerial candidate.