Lessons from the lung
Thailand
General

Lessons from the lung

Bang Kachao, the 'lung' that breathes oxygen for Bangkok, often welcomes visitors, including youngsters taking a boat tour as well as people in the neighbourhood. Conservation efforts are intensifying to keep the vast green area the way it is.

It's not every day that youngsters from local primary schools around the iconic "green lung" district of Bang Kachao get to join a pre-school-break excursion to see the vast expanse of the land from a different perspective.

The tour could serve to incentivise the youngsters to appreciate the precious unspoiled environment sitting on the city's doorstep, and to become an agent working to prevent such green expanses from being bulldozed over to make way for condos and shopping malls.

Recently, 50 students from five primary schools went on a half-day boat trip around the "lung" that has been pumping oxygen into Bangkok.

The students who live in different districts and communities came away knowing more about the Bang Kachao communities, said Prakit Rodcharoen, who led the tour.

The 63-year-old former state enterprise employee later quizzed them on their trip.

"Do you know the depth of the Chao Phraya River in this area?" Mr Prakit asked.

"Eighteen metres!" said one boy who had clearly been paying attention.

Mr Prakit then cleared his throat before singing a song with his young wards. The song is about the geography of Bang Kachao and how it should be preserved as Bangkok's largest green space.

The singalong carried on as the boat plied the Chao Phraya on a trip of contrasts. On one side stood the tree-fringed riverside homes of the Bang Kachao communities that face the concrete jungle of metropolitan Bangkok.

"My house has no air conditioner, but it's not hot," said Panita Thammaratttananuparb, a Prathom Suksa 5 (grade 5) student from Wat Bang Kra Sob school.

"I love it that there are so many fruit trees at home, like mangos, bananas, rose apples and coconuts. I always help my grandpa water them," she said.

Her family orchard is one of many which typify what the folks of Bang Kachao have done to earn a living for generations. 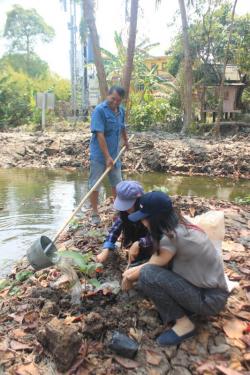 Visitors are shown the local way of planting trees and how to nurture them in a bid to maintain an ecological balance.

Even though they are surrounded by high-rises and urban developments, the residents of Bang Kachao still maintain the tradition of planting and caring for trees and crops in their home gardens.

Bang Kachao is known locally as "krapow moo" on account of its land mass resembling a pig's stomach.

Geographically, the district is shaped like an island with the Chao Phraya running around most of it. It is about 20 square kilometres, or 11,819 rai, and is divided into the six sub-district municipalities of Bang Nam Pueng, Bang Yor, Bang Ko Bua, Bang Kra Sob, Song Khanong and Bang Kachao.

It is also a designated conservation area full of native vegetation, a network of canals, local gardens and fruit orchards, making it one of the last remaining green parks close to the sprawling Bangkok metropolis.

Praised by Time magazine as the Best Urban Oasis of Asia, Bang Kachao, with its dense green areas of 5,700 rai, or 48% of the total land, is capable of absorbing 6,000 tonnes of carbon dioxide per year while also producing oxygen for the millions of people dwelling in Bangkok.

But not all of Bang Kachao's land is privately owned. Some 1,276 rai are owned by the Royal Forest Department, which residents argue should play a bigger role in helping to keep the area in its pristine state.

About half of the estimated 40,000 local residents still grow garden vegetables in their backyards or plant big trees alongside cash crops.

Bang Kachao sits at the confluence of three natural ecosystems, namely the mangroves, freshwater swamp forests and tropical rainforest. This contributes to the richness of the land and spurs agricultural productivity and biodiversity. Today, the vestiges of these ecosystems still provide a source of livelihood for locals and serve as an oasis for tourists.

But the future of Bang Kachao remains uncertain, given the advancing urbanisation which looks unstoppable.

It is quickly transforming into an urban zone. Many original landowners have sold their land as the demand for real estate has shot through the roof, pushing up land prices at least 10 times higher than in recent years.

The plots close to the river are thought to fetch millions of baht per rai. The latest land utilisation policy also fuels development as it permits the construction of detached houses and small resorts.

Challenges like water salinity, floods, pollution and waste management have also been detrimental to Bang Kachao and the green areas around the Chao Phraya River's estuary.

With the growth in population and rapid urban development, much farmland was either sold to outsiders or left unused.

Some parcels of land have become dumpsites, polluting waterways and canals and endangering the health of locals while tainting the fresh produce. The lack of a suitable land use blueprint disrupts the ecology and is bad news for biodiversity, people's livelihoods, food production and the local economy.

People like Mr Prakit and Pathanajarin Suankaewmanee, who are born and raised in Bang Kachao, have taken matters into their own hands. They feel Bang Kachao's ecology, its most prized asset, must be conserved so more people will realise its value and join efforts to resist any further moves to disturb its natural environment. 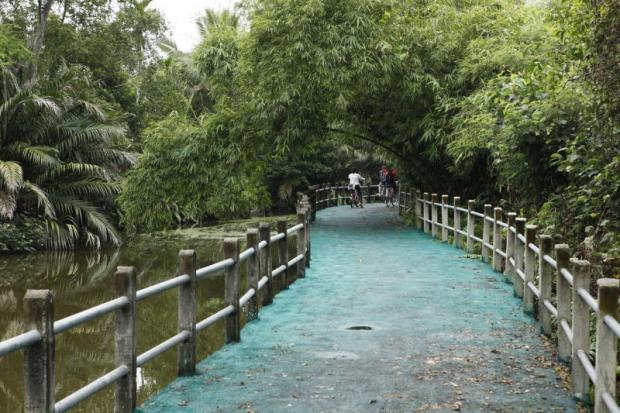 Bang Kachao is high on the list of Bangkok residents' favourite places for cycling. It provides many nature trails that meander through parks and orchards. photos by Apiradee Treerutkuarkul

They started their own conservation network to conduct community-based research on the effects of climate change on Bang Kachao's water resources and how the area has adapted.

With the help of the United Nations Food and Agriculture Organisation (FAO) and partners, the network aims to convert abandoned land in Bang Kachao into locally-managed conservation zones.

One of the proposed sites is called the "natural classroom", where the intercropping of timber and fruit trees with cash crops in an agroforestry system is demonstrated.

Marking the International Days of Forests on March 21, the venue served as a learning centre for sustainable management of natural resources in Bang Kachao for students, residents and visitors.

She said there is a pressing need to persuade residents to support the initiative by planting more trees in order to enhance the area's ability to "breathe out" oxygen. 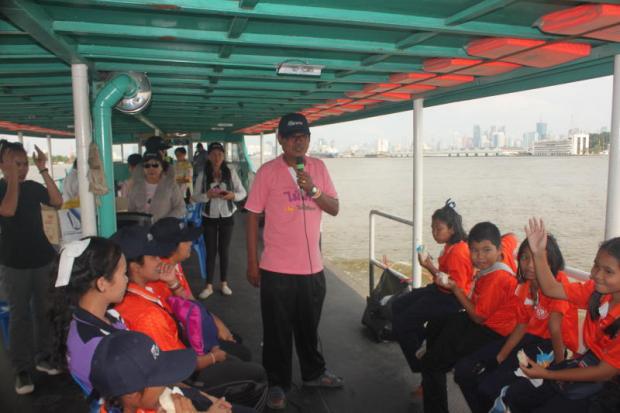 Payung Rojanasaeng, 72, a native of Bang Kachao and a member of the conservation network running the agroforestry project, brought several seedlings to grow in the "natural classroom".

He said within three years the land would be adorned with an array of native and fruit-bearing trees.

"We are not doing this for ourselves but in order to help younger generations learn to love and appreciate, and make practical use of, these natural resources for more sustainable livelihoods. They and their communities will be the beneficiaries," he said.

With initial funding from the FAO, the estimated six rai of abandoned land is slowly being transformed. Soil has been cultivated and ditches dug.

Seedlings from native Thai forest trees have also been planted alongside mangoes, rose apples, guavas and other fruit trees. The proceeds from the fruit will be fed back into the communities.

"Once the natural classroom is up and running, we can bring more students out here for field trips," said Ms Pathanajarin.

"Investing in young children is an investment for the future," she said.

"Our initiatives in Bang Kachao show how crucial it is to put a high value on education, support local champions, and create positive impacts on the ground -- all key ingredients for a sustainable future."