Getting up close: A woman takes pictures of jars containing marijuana oil and dried marijuana leaves put on display at a marijuana fair held in buri Ram.

Bantoon Niyamapa, the 64 year-old distributor of the cannabis seeds, said people should have the right to gain access to cannabis for its disease-curing benefits, as well as the right to plant it for their own personal benefit.

If Mr Bantoon’s action is deemed to be illegal, however, the police could press charges against him.

“I am willing to be arrested if what I have done is wrong. Police should also arrest vendors who sell it illegally on their websites. I’m just giving people the chance to gain access to alternative medical treatments,” he said. 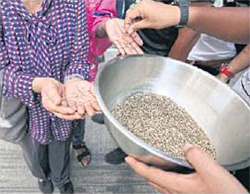 Seeds of growth: Marijuana seeds are given away to participants in 'Phan buri Ram', a marijuana fair held from Friday until today in buri Ram to educate the public about how the narcotic plant ca be used for medical purposes.

Mr Bantoon, who is also known as Uncle Tu, is a vocal supporter of cannabis legalisation who has also personally used the plant for cancer treatment.

He distributed around one kilogramme of cannabis, with a quota of six seeds per person, adding the activity was meant to mark “420 Day”, also known as “World Weed Day”, yesterday.

Growing cannabis is still illegal in Thailand as the plant is regarded as a drug under a narcotics law.

The law limits cannabis growth and possession to the purposes of medical research and development.

The law still prohibits growing the plant for personal use.

The Food and Drug Administration (FDA) has granted a 90-day window, which lasts until May 19, for people who possess the plant to report themselves to authorities. So far, 1,053 people have registered themselves since February 27.

Mr Newin, who was in charge of the fair, said he didn’t find anything wrong with the distribution because people who received the seeds would come to legally register their possession.

He told reporters that Prime Minister Prayut Chan-o-cha should exercise his power under Section 44 and declare free cannabis access for medical treatment, adding the prime minister should study the best model of cannabis legalisation and immediately implement it in Thailand.

“The world is going fast and we can’t catch it up. The thing that upsets me the most is that Thai people will only be the users, not the producers, despite the fact that we are in the place that has the best cannabis in the world,” he said.

Citing the case of the 10 million-baht cannabis growth project directed by the Government Pharmaceutical Organisation, Mr Newin said that his fair has provided easy-to-build cannabis greenhouses for the price of 10,000 baht, as well as a simple method to extract oil from cannabis.

“More regulations are going to be issued with less and less benefits to the locals. I don’t know what’s going to be next after May 19. Will those registered people be regarded as drug users? If yes, I will feel guilty because I helped them register at my fair,” he said.

However, Mr Newin is confident there will be more progress on the issue because Anutin Charnvirakul, leader of the Bhumjaithai Party, said the party will join any government-coalition party if it has the full authority to push the free cannabis growth policy.

The second day of the cannabis fair saw over 5,000 pot enthusiasts in attendance.